Iranian Parliament Speaker Ali Larijani said North Korea has shown “praiseworthy” resistance against the United States’ bullying, expressing hope that peace and security will be established in the world as soon as possible. 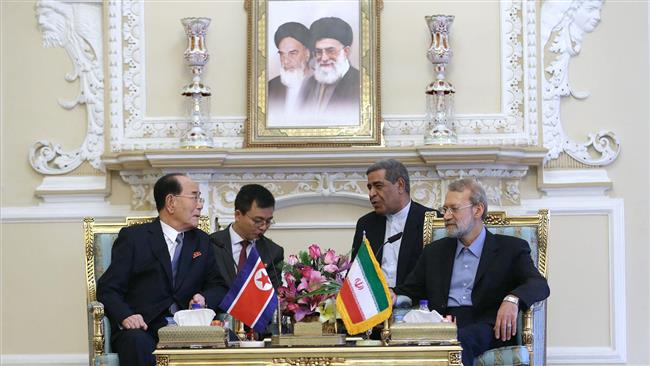 TEHRAN, Young Journalists Club (YJC) - “A state of chaos in the world will not be beneficial to any country and will harm everyone,” Larijani said in a meeting with Kim Yong-nam, the president of the Presidium of the Supreme People's Assembly of North Korea, in Tehran on Friday.

He pointed to Iran’s peaceful nuclear program and said nuclear arms are dangerous for security of every country and the entire world.

“Nuclear weapons are harmful to every country and the Islamic Republic supports [the use of] peaceful nuclear energy,” the top Iranian parliamentarian pointed out.

The North Korean official, for his part, said Tehran and Pyongyang have a common enemy and added that the US is continuing with its bullying policies.

He added that his country advocates the establishment of peace in the world; however, it will not abandon its national interests and urged the US to stop its hostile policies to North Korea.

He also called for the expansion of relations with Iran to serve the two countries’ interests.

North Korea regards the US as its arch enemy since Washington has adopted a war-like posture vis-à-vis Pyongyang and has permanent military presence in the region.

North Korea sees its missile and nuclear capabilities as a deterrent against a potential US aggression.