TEHRAN, November 20 -Hundreds of protesters have marched in Washington, DC, to draw attention to the situation in hurricane-stricken Puerto Rico amid criticism that the Trump administration's response has been inadequate. 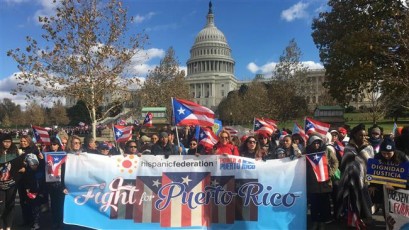 TEHRAN, Young Journalists Club (YJC) -Hundreds of protesters have marched in Washington, DC, to draw attention to the situation in hurricane-stricken Puerto Rico amid criticism that the Trump administration's response has been inadequate.

Dubbed "The Unity for Puerto Rico March," the event was attended by San Juan Mayor Carmen Yulin Cruz and politicians like Representative Luis Gutierrez of Illinois, who said Puerto Rico had been neglected.

Waving the island territory's red, white and blue flag, the protesters sang and chanted in unison: "What do we want? Justice! When do we want it? Now!", "Who's in the house? Puerto Rico's in the house!" and also repeating "The Jones Act has got to go."

Addressing the rally, Gutierrez said the Trump administration’s lackluster help to Puerto Rico was "one of the gravest injustices that I have seen."

The lawmaker then took direct shots at Donald Trump, saying the recent $44-billion hurricane aid package unveiled by the president was not enough, a point also raised by other lawmakers.

Noting that many Puerto Ricans served in the military and deserved better support from the federal government, Gutierrez further blasted Trump for dodging military service.

"We have a president of the United States who on four occasions... said, 'My foot hurts, I cannot serve,'" the lawmaker said. "But he was able to take those feet to every golf course all over the world and walk on them."

Trump received four student deferments from serving during the Vietnam War. He told ABC News during last year’s presidential campaign that he only "had a minor medical deferment for feet, for a bone spur of the foot, which was minor."

Gutierrez said Trump has no right to disparage Puerto Ricans, who he said are being shortchanged in relief shipments of food, supplies and medicine.

"Well, let me just say to the president of the United States each and every time an airplane showed up in World War II, Korea, Vietnam, you filled it with Puerto Ricans and they said 'Presente!'" he said.

Trump has feuded with the mayor of Puerto Rico’s capital over the pace of the relief effort.

In the aftermath of the destructive hurricane, he berated Cruz and suggested Puerto Ricans were ungrateful people who "want everything to be done for them."