$200bn to reconstruct war-torn Syria, Who pays? US and its allies?!

TEHRAN, December 19 - With Syria’s nearly seven-year war now virtually over, the process of rebuilding the devastated country comes to the fore, with the financial cost of that effort put at $200 billion. 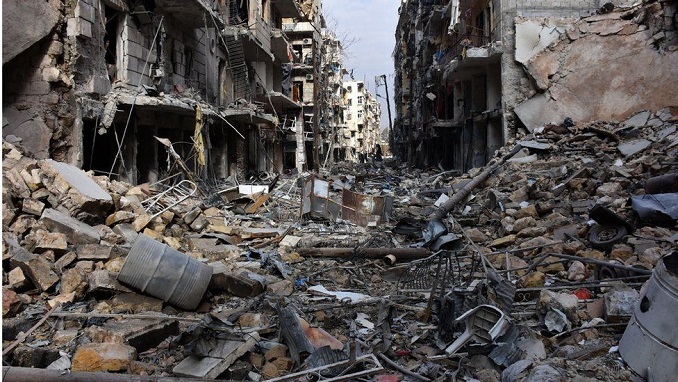 TEHRAN, Young Journalists Club (YJC) - When you view the ruins of Aleppo alone, Syria’s second biggest city, plus the carnage across the entire country, from towns, villages, bridges, roads, public utilities, hospitals, schools, and so on, the real figure for reconstruction could be far higher than $200 billion.

Then there is the inestimable cost of human suffering and families decimated. All told, the reparations could amount to trillions of dollars.

Syria’s war was no ordinary civil war, as Western mainstream media tended to mendaciously depict it.

From the outset, the conflict was one of an externally driven covert war for regime change against the government of President Bashar Assad. The Arab Spring unrest of 2011 provided a convenient cover for the Western plot to subvert Syria.

The United States and its NATO allies, Britain, France, and Turkey, were the main driving forces behind the war in Syria, which resulted in up to 400,000 deaths and millions of citizens displaced from their homes. Other key regional players sponsoring the campaign against the Syrian government were Saudi Arabia, Qatar, and Israel.

Most of the militants who fought in Syria to overthrow the state authorities were not Syrian nationals. Self-styled jihadists from dozens of countries around the world made their way to Syria, where they were funded, armed and directed by covert forces from Western and Arab states.

The barbarian-like gravitation to Syria indicates the degree to which the effort to overthrow the Syrian government was orchestrated by foreign powers.

This was a planned, concerted project for regime change. The systematic violence imposed on Syria was very arguably due to an international criminal conspiracy perpetrated by the US and all of the above “partners.” The case can, therefore, be made for criminal responsibility.

That, in turn, means that financial reparations and damages can be sued by the Syrian state against those foreign powers which waged the war, albeit indirectly through proxy militant groups.

The bitter irony though is that the US and its Western allies are reportedly using Syria’s war-torn plight as leverage to pursue their political objective of ousting Assad. What these powers could not achieve on the battlefield with their terrorist mercenaries they now seem to be pursuing through their dominance over international financial institutions.

As Bloomberg News reported last week: “The US and its European and Arab partners have for years insisted that Assad must go and are now using the carrot of funding for rebuilding the shattered nation in a final attempt to pressure the Syrian leader. The International Monetary Fund estimates the cost of reconstruction at $200 billion, and neither of Syria’s main allies, Russia and Iran, can afford to pick up the bill.”

It’s a moot point whether Russia and Iran cannot afford to help rebuild Syria. Who’s to say that those two powers along with China and other Eurasian nations could not club together to create a reconstruction fund for Syria, independent of Western countries and their Arab client regimes?

However, regardless of the source of funding for Syria, what Russia, China, Iran and other key international players should push for at the United Nations and other global forums such as the Non-Aligned Movement is the repudiation of Western efforts to link financial aid to future political change in Syria.

Alexander Lavrentiev, Russia’s envoy steering the peace process in Syria, has reiterated Moscow’s position that the political outcome for Syria must be determined by the Syrian people alone, free from external influence. That is also the position of several UN resolutions.

Lavrentiev says Bashar Assad should be free to run in next year’s presidential election if he chooses to and that it is unacceptable for the US and its allies to try to use financial aid as a bargaining tool.

“It’s a simplistic approach when some Western countries say that they’ll give money only when they see that the opposition comes to power or their interests are fully accommodated,” said the Russian envoy.

It’s not merely unacceptable for such Western conditioning. It’s outrageous. Far from quibbling about financial aid to Syria, the debate should be broadened out to hold governments to account for the destruction and loss of life in Syria.

To establish responsibility is not a mystery. Saudi Arabia, Qatar, and Turkey are known to have poured money and weapons into dozens of jihadist-styled groups, including Ahrar al-Sham and Jaysh al Islam under the umbrella of the Islamic Front or Army of Conquest. The precise distinction – if any – between these groups and the internationally proscribed terror organizations of Nusra Front (Hayat Tahrir al-Sham) and Isis is elusive and probably negligible.

American, British and French special forces are known to have trained militants under the faux banner of “moderate rebels” and “Free Syrian Army,” even when there is evidence these same groups were cooperating with Al-Qaeda-type extremist networks. Under President Barack Obama, the US government funneled $500 million into training “rebels” in Syria. Trump earlier this year closed down CIA training operations. This is, in effect, an admission of culpability by Washington of fueling the war.

The Americans and British forces were up to recently training the militant group Maghawir al Thawra at Al Tanf base on the Syrian-Iraqi border. The American government also funded another jihadist group Nour al-Din al Zenki, which came to notoriety in a video showing their members beheading a Palestinian boy.

Weapons caches recovered by the Syria Arab Army after the liberation of ISIS strongholds in Deir ez-Zor also show stockpiles of US-made arms and other NATO munitions, including anti-tank missiles.

There have been systematic links between Western governments, their regional client regimes and the terror proxies who carried out the dirty war on their behalf in Syria over the past seven years.

It is an insult upon injury for Western governments to impose constraints on financial aid to Syria. Furthermore, the economic costs of reconstruction should not be levied on the Syrian people. Those costs should be paid in full by Washington and its partners who engaged in a criminal war on Syria.

Not only should Washington, London, Paris and others be made to pay damages. Political and military leaders from these countries should be placed in the dock to answer personally for crimes against the Syrian people. To allow impunity is to let Washington and its rogue cohorts keep repeating the same crimes elsewhere, over and over.