Unfazed by Trump’s order, migrants walk on north in Mexico

TEHRAN, November 11 - Thousands of Central American migrants have resumed their march through Mexico and toward the United States after a four-day respite, despite a measure by the administration of US President Donald Trump to suspend asylum rights for immigrants trying to enter the country illegally. 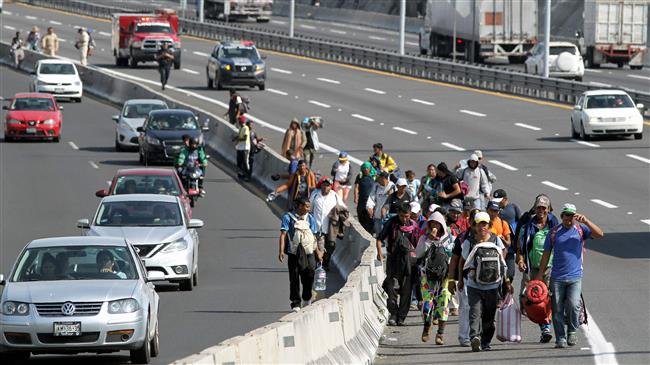 TEHRAN, Young Journalists Club (YJC) - Some 4,000 Central American migrants continued their trek toward the US after leaving a stadium in southern Mexico City early on Saturday.

Carrying backpacks, blankets, and food, the migrants — many of them with children in tow — are now headed toward the northwest and will pass through the Mexican cities of Queretaro, Guadalajara, Culiacan, and Hermosillo until they arrive in Tijuana, just south of the US border.

Caravans of Central American migrants — many fleeing violence, corruption, and unemployment in their homeland — started the march toward the US in early October and are mostly from Honduras.

“It doesn’t matter what rules (Trump’s) government imposes — we cannot go back to our countries. I have a bullet in my arm and another in my shoulder. If I go back home, it’d be better for me to go with a casket,” said 30 year-old Julio Caesar from Honduras, who declined to give his last name.

The march was resumed just a day after the US president signed an order barring migrants who cross the US border with Mexico illegally from claiming asylum in the US.

US government officials said the order would be in effect for at least three months as of November 10 and would not affect people who are already in the country.

‘The asylum ban is illegal’

“Neither the president nor his cabinet secretaries can override their clear commands of US law, but that’s exactly what they’re trying to do [with the immigration order].”

The United Nations High Commissioner for Refugees (UNHCR) also criticized the Trump administration for not fulfilling obligations to help the Central American migrants.

“UNHCR expects all countries, including the United States, to make sure any person in need of refugee protection and humanitarian assistance is able to receive both[,] promptly and without obstruction,” UNHCR said in a statement on Friday.

Trump has called the Central American migrants a security threat, ordering the deployment of thousands of troops to the Mexican border to contain them.

More than 7,000 active duty troops have been deployed to the US states of Texas, Arizona, and California. Border areas have also been secured with razor wire.

The US president has also suggested that the US troopers deployed to the southwest borders can shoot at migrants if the latter threw stones or rocks at them.

Trump has announced plans to revoke the right to citizenship for babies born to non-US citizens on American soil and build massive “tent cities” to detain the migrants.