Nine people killed in shootout between rival outfits in Mexico 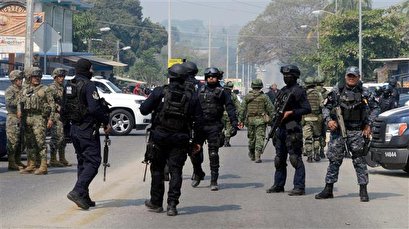 The confrontation occurred Wednesday on a highway in a rural area in the state of Guerrero, the local attorney's office said in a statement.

"The deceased are close to Zenen Nava Sanchez, leader of the criminal group, Los Rojos," it read, adding an investigation had been launched into the incident.

A long-running dispute for territory between Los Rojos and a rival gang has left more than a thousand people dead. The dispute centered on a town some ten kilometers from where the firefight took place, according to local media.

Experts at the site retrieved 50 bullets used in high-caliber weapons such as the AK-47 assault rifle.

Last month, 15 people including a soldier were killed in the same state after gunmen attacked security forces.

The violence underlined the struggles of leftist President Andres Manuel Lopez Obrador to rein in crime since he took office last December.