Tehran 25 February _US presidential candidate Bernie Sanders has criticized the US government for its massive military spending and tax breaks for wealthy individuals and corporations while eliminating social benefits for low-income and middle class families. 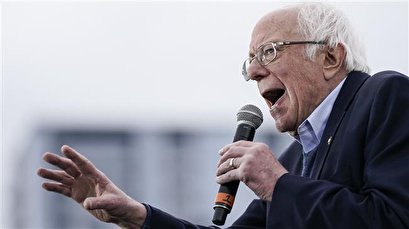 TEHRAN, Young Journalists Club(YJC)-Sanders on Monday proposed spending $1.5 trillion over 10 years to create a universal child care and early education system, to be funded by taxing the wealthiest Americans.

The proposal is the latest by the frontrunner Democratic candidate that would vastly expand America’s social welfare system as he seeks the nomination to challenge Republican President Donald Trump in the November election.

Sanders is proposing massive overhauls of the US economy, including taxing the wealthiest Americans to provide free colleges and ban private health insurance in favor of a government-funded system that guarantees universal health coverage, a system already carried out by many developed countries.

“We have a moral responsibility as a nation to guarantee high-quality care and education for every single child, regardless of background or family income,” the Sanders campaign said in a proposal posted on his website.

During an interview on CBS News’ “60 Minutes” Sunday night, he was asked how much those programs would cost and how his administration would pay for them.

Anderson Cooper asks Bernie how will he pay for his universal childcare plan. Bernie goes off, “I’m getting a little tired ... No one ever asks how we pay for $750 billion in new military spending or $1 trillion tax cut for the rich or Wall Street” pic.twitter.com/PcGQkuQFnL

“How you going to pat over a trillion dollars in tax breaks to the 1% and large corporations, which was what Trump did,” he said. “When you help the billionaires and you help Wall Street, hey of course we can pay for it, that’s what America is supposed to be about; well I disagree.”

The childcare and early education proposal would push America in the direction taken by many other advanced countries by boosting access to publicly funded childcare and pre-kindergarten education.

Sanders said the program would be paid for by taxing the wealth of the richest 0.1% of Americans. Most developed country governments spend more than the United States does on childcare and early education.