Tehran, YJC. Pourmohammadi has said that the Central Bank of Iran has turned into an executive tool in the hand of the government. 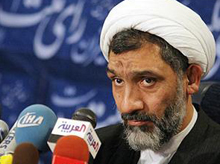 Speaking in the Sharif University of Technology, Hojjatoleslam Mostafa Pourmohammadi said "The Central Bank has its own rules in its monetary and financial administrations. But regrettably, today the Central Bank has lost its identity to turn into an executive office for the government. Today disastrous things have befallen the country for the Central Bank’s lack or independence. In other words, there is no independent management over money and finance.”

"Therefore, today in the world, in order that the governments do not impose their needs on countries, central banks are moving towards independence. This must happen in our country as well,” he asserted.

Share to
Related News
Relations with US in line with subversion/ Resisting US has frustrated Iran: two experts debate
Your Comment