TEHRAN, May 30, YJC - Iran has censured terrorist bombings in two busy districts in the Iraqi capital, Baghdad, saying the “criminal move” clearly indicated the inherent enmity of terrorists toward Islam and Muslims. 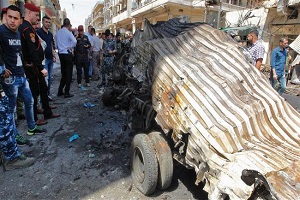 TEHRAN, Young Journalists Club (YJC) -Iranian Foreign Ministry Spokesman Bahram Qassemi on Tuesday expressed his sympathy with the Iraqi government and nation as well as the bereaved families of the victims of the terrorist blasts, which killed at least 27 people and wounded more than 115 in Baghdad.
In the deadliest of the two attacks, a terrorist detonated an explosives-rigged vehicle at a popular ice cream shop at around midnight (2100 GMT Monday), killing at least 16 people and wounding 75.
The Daesh Takfiri terrorist group claimed responsibility for the bombing, with its affiliated Amaq outlet saying a bomber had targeted a "gathering of Shias.”
The Iranian spokesperson said the criminal act in the holy month of Ramadan was a clear indication of Takfiri terrorists’ inherent enmity toward true Islam and Muslims.
It was also the latest futile attempt by terrorists to make up for their defeats in Iraq, he added.
Qassemi emphasized that the final victory against terrorism in Iraq was imminent and expressed hope that Iraq would be completely cleansed of Takfiri terrorists soon given the recent achievements by the Iraqi popular forces in the northern city of Mosul.
In a statement on Saturday, the Iraqi military announced the beginning of an offensive to retake the last enclave controlled by Daesh in Mosul as the Takfiri terrorist group is being dealt final blows in the Arab country.
The statement was released one day after the air force dropped leaflets urging residents in Mosul’s Old City center to flee through safe corridors.
source:Press TV
Share to
Related News
Casualties reported after bomb attack in Iraq’s Anbar province
US airstrikes in Afghanistan tripled: in 2017: Official
Massive bombing strikes heart of Baghdad
Situation tense in Bahrain after deadly Diraz raid
Tags
blasts ، baghdad ، terrorist
Your Comment