May apologizes to Tories for election ‘mess’

TEHRAN, June 13, YJC -UK Prime Minister Theresa May has acknowledged her fault for the Conservative Party’s dismal performance in the June 8 general election, apologizing to the MPs for the “mess” she created. 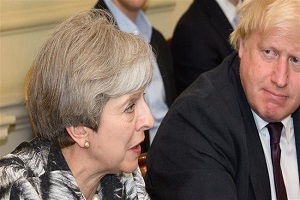 TEHRAN, Young Journalists Club (YJC) - "I got us into this mess I'll get us out of it," May told The Conservative Private Members' Committee, or the 1922 Committee, on Monday night.
May called for the early election in mid-April to get a "stronger hand” in Brexit negotiations with the European Union (EU) but instead cost her party the overall majority in Parliament.
The embattled PM has been urged to resign following the Thursday election, where her party lost 12 seats of its 330-seat parliamentary majority and now needs help from other parties to remain in power.
To make things worse, the main opposition party Labour entered the election holding only 229 seats and came out with 262, raising the chances of its leader Jeremy Corbyn to succeed may as the next premier.
According to one of the MPs present at the Monday meeting, May told her party members that she would serve as "long as you want me to do."
She also accepted in the meeting that her authority was "extremely fractured" and she was no longer "calling the shots.”
May has been trying to save herself by forming a coalition government with Northern Ireland’s Democratic Unionist Party (DUP).
The two parties have key differences that overshadow the prospect of a minority government.
Negotiations between the two parties have failed so far to yield an agreement, raising the possibility of a delayed Queen's Speech, which details May’s legislative agenda.
Under the proposed deal, the DUP is expected to pass the Queen’s Speech and budgets in exchange for Tory concessions.
Ireland’s Prime Minister Enda Kenny has warned May that deal might endanger peace.
Energized by the historic outcome, Corbyn, who still remains in minority, has called on May to step down and clear the way for him to lead the UK's exit from the European Union (EU).
Noting that he could "absolutely” still be prime minister, Corbyn told BBC on Sunday he was planning to vote down May’s legislative agenda and put together an alternative of his own in order to win support.
Source:Press TV
Share to
Related News
‘Build bridges, not walls,’ British Labour leader tells US president
Labour will 'try to force early UK election': Jeremy Corbyn
Ex-rebel commander poised to win Kosovo polls
May not sobbing over election fiasco: Brexit minister
Irish premier warns May on her DUP deal, suggesting it could endanger peace
Tags
may ، election ، apologize
Your Comment