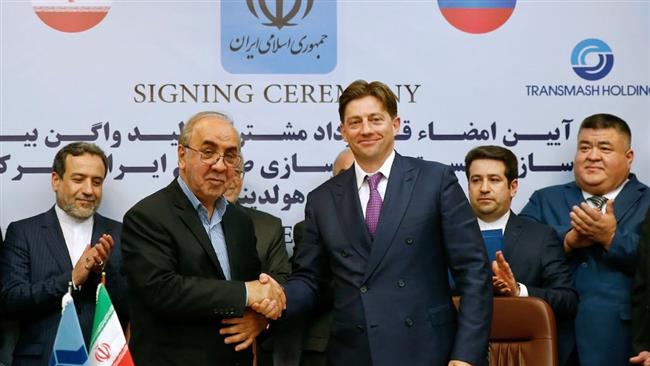 TEHRAN, Young Journalists Club (YJC) - Transmashholding is the largest manufacturer of locomotives and rail equipment in Russia. It will hold an 80% stake in the joint venture, taking over Iran’s Wagon Pars Company to produce railroad cars in the country.

“We are not concluding a purchase or contracting agreement. This partnership rather is likely to last for the next 30 years or be extended even further,” Iran’s Minister of Industry, Mine and Trade Mohammad Reza Nematzadeh said before the signing of the contract in Tehran Monday.

The joint venture will lead to a 55% localization of rolling stock manufacturing in Iran, putting the country’s software, hardware, and internal workforce capabilities into good use, the minister added.

The initial agreement was reached last year, under which Iran is about to import 1,100 freight wagons from Russia and jointly produce another 5,000 units in the Islamic Republic.

IDRO Group Managing Director Mansour Moazzami, whose company will hold the remaining 20% stake in the venture, said the management will be rotational, while the Russian side will provide the financing.

The official said Iran needs 8,000-10,000 railroad cars in total, according to the Transportation Ministry estimates, adding the partnership is an opportunity for both countries and that he hoped the deal would be the beginning of a broader cooperation between them.

Lipa was quoted by the English-language Financial Tribune as saying that his company was “thinking about deeper cooperation.” The capacity of the joint venture, he said, would depend on the depth of localization.

“For assembling, we’re thinking about 300-400 units per year,” he told the Tehran-based paper. “We’re here not to bring, let’s say, products just from Russia. We are here to develop local production,” he added.

The joint venture with the Russians is among the biggest contracts which Iran has signed recently with international companies after the removal of sanctions on the Islamic Republic.

Last month, the country signed a deal worth 1.2 billion euros with Italy’s state railway company Ferrovie dello Stato (FS) to build a high-speed railway between the central cities of Arak and Qom.

Later in the month, French transport company Alstom signed a joint agreement for the construction of subway carriages in Iran.

While the value of the contract was not given, Nematzadeh said the deal was for the joint production of 1,000 wagons in Abhar, 227 km west of Tehran, in which Alstom will hold a 60% stake, with IDRO and Iranian Rail Industries Development Co holding 20% each.

The Export-Import Bank of China (EXIM) also signed a $1.5 billion deal to finance the electrification of a high-speed rail line between the Iranian cities of Tehran and Mashhad.

Iran has announced plans to splurge up to $25 billion over the next 10 years in the modernization and expansion of its railway network.