TEHRAN, August 4, YJC - Rwandans began voting Friday in a presidential election widely expected to return strongman Paul Kagame to office for a third term at the helm of the small East African country. 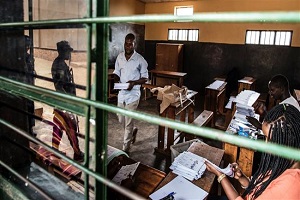 TEHRAN, Young Journalists Club (YJC) -Some 6.9 million Rwandans have registered to vote in the poll, which pits Kagame, 59, against two little-known candidates seen as unlikely to pose any threat to his Rwandan Patriotic Front's tight control of the country.

At a school in the capital, Rwandans waited patiently to cast their ballots, many of them praising Kagame for his leadership since he halted the 1994 genocide.

He served first as vice-president, although he was widely considered the de facto leader of the country and was appointed president by lawmakers in 2000. He was first elected to the post in 2003 and again in 2010 with more than 90 percent of votes.
He is credited with a remarkable turnaround in the shattered country, which boasts an annual economic growth of about seven percent, is safe, clean, and does not tolerate corruption.

However, rights groups accuse him of ruling through fear, relying on a systematic repression of the opposition, free speech, and the media. Few Rwandans would dare to openly criticize him.

Habineza and Mpayimana complained that they were only allowed one week to fund-raise and three weeks to campaign before the election.