North Korea threatens ‘severe’ revenge on US if attacked

TEHRAN, August 7, YJC - North Korea said it is ready to teach the United States a "severe lesson" with its strategic nuclear force if Washington dares opt for military action against Pyongyang. 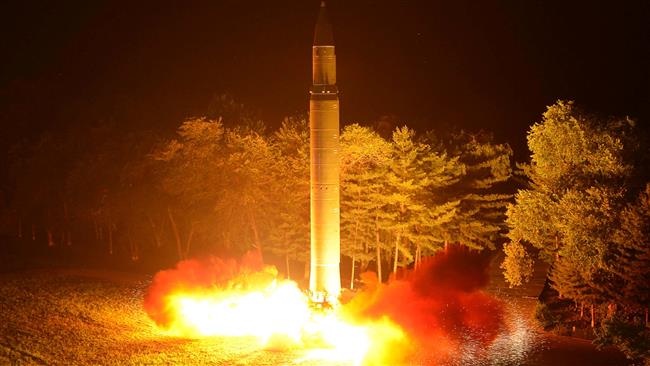 TEHRAN, Young Journalists Club (YJC) - In a transcript of a statement by Foreign Minister Ri Yong-ho, Pyongyang called new US-led sanctions at the UN Security Council "fabricated" and warned there would be "strong follow-up measures" and acts of justice.

The intercontinental ballistic missile (ICBM) tests in July proved that the entire US was in its firing range, and those missiles were a legitimate means of self-defense, it added.

The statement, which was carried by the North's official Korean Central News Agency, also said that the sanctions were a "violent infringement of its sovereignty" that was caused by a "heinous US plot to isolate and stifle" North Korea.

The sanctions will never force the country to give up its push to strengthen its nuclear capability as long as US hostility and nuclear threats persist, it pointed out.

"It's a wild idea to think the DPRK (the Democratic People's Republic of Korea) will be shaken and change its position due to this kind of new sanctions formulated by hostile forces," the statement read.

The statement also accused the UN of abusing its authority.

The warning comes after the UN Security Council on Saturday passed a resolution slapping sweeping sanctions on the North over its first test launch of an intercontinental ballistic missile.

The UNSC members, including Pyongyang’s traditional allies, Beijing and Moscow, voted 15-0 for a partial ban on exports aimed at slashing Pyongyang’s $3 billion foreign revenue by a third.

The US ambassador to the UN, Nikki Haley, called the US-drafted resolution "the single largest economic sanctions package ever leveled against" North Korea.

The sanctions ban all exports of coal, iron and iron ore, lead and lead ore, as well as fish and seafood from the country. They also block North Korea from increasing the number of workers it sends abroad, and prevents new joint ventures with Pyongyang or increasing investments in current ventures.

Pyongyang says it needs to continue developing its missile force as a deterrent against the US and its regional allies’ aggression and expansionism.

Since early July, the North has tested two ICBMs, which it says can hit the US mainland.

Share to
Related News
North Korea threatens ‘severe’ revenge on US if attacked
US: Nuclear missile test ‘not a response to North Korea’
Russia: Fresh sanctions remove hope of better relations with the US
China urges Trump not to link trade ties to North Korea issue
N Korea says whole US mainland within range of its ICBMs
Tags
North Korea ، missile ، south korea
Your Comment