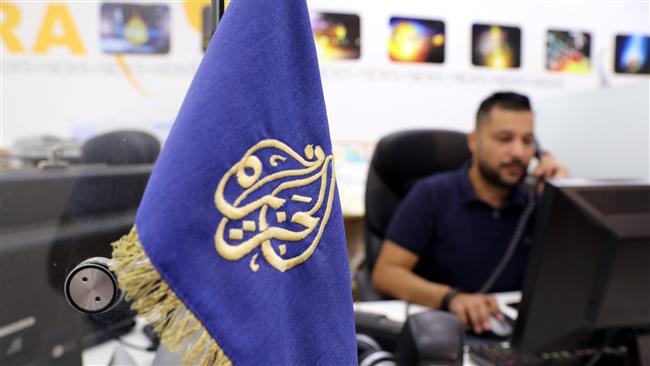 TEHRAN, Young Journalists Club (YJC) - "The move sends a chilling message that the Israeli authorities will not tolerate critical coverage," Magdalena Mughrabi, deputy director for the Middle East and North Africa at the London-based group, said in a statement on Monday.

"This is a brazen attack on media freedom," she added.

The Amnesty official also called on Tel Aviv to "halt any attempt to silence critical media," saying that "all journalists should be free to carry out their work without facing harassment or intimidation.”

The condemnation came a day after Israel said it had plans to revoke the credentials of journalists working for the Qatar-based channel and also cut its cable and satellite connections over allegations of bias in its coverage of the Israeli-Palestinian conflict.

Responding to the move, Al Jazeera censured the decision as unsubstantial, saying it would “take the necessary legal measures towards it.”

"Al Jazeera Media Network denounces this decision, which comes in the context of a campaign that was initiated by a statement made earlier by Israeli Prime Minister Benjamin Netanyahu," the Doha-based broadcaster said.

On July 27, the Israeli premier threatened to shut down Al Jazeera's bureaus, accusing the broadcaster of inciting violence against Tel Aviv amid tensions over al-Aqsa Mosque.

The network said in July that Tel Aviv was aligning itself with Saudi Arabia, the United Arab Emirates, Egypt and Bahrain that have severed diplomatic and commercial relations with Qatar.

Jordan and Saudi Arabia have shut down Al Jazeera's bureaus, while the channel and its affiliate sites have been blocked in Saudi Arabia, the United Arab Emirates, Egypt and Bahrain.

The closure of Al Jazeera is one of the 13 demands put forward by the four countries to normalize ties with Qatar, which the country has rejected.