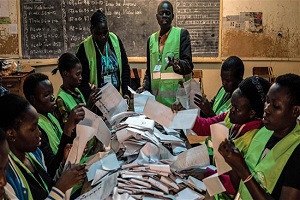 TEHRAN, Young Journalists Club (YJC) -According to the official website of Kenya’s election commission (IEBC), Kenyatta was holding on to a commanding lead with 54.8 percent, while Odinga has only secured 44.4 percent after nearly 13 million ballots were counted from more than 35,000 of the 40,833 polling stations.

Speaking at a news conference on Wednesday, Odinga claimed that the results of Tuesday’s general elections are not reliable as the election commission’s voting systems had come under cyberattack, leading to “massive and extensive” vote fraud.

“You can only cheat the people for so long,” the opposition leader said. “The 2017 general election was a fraud.”

He called on his supporters to maintain calm, but said “I don’t control the people.”

Odinga’s deputy, Kalonzo Muyoka, also made a similar call, adding, however, that the opposition might urge “action” at a later date, without elaborating.

The opposition figure had earlier in the day decried the tallying process as a “sham.”

Odinga alleged that the IEBC had not provided documents showing how the tallies were obtained, saying “it is the machine that has voted. These results are wrong.”

The hacking claims prompted Kenya’s Election Commission to react and counter the allegations, assuring Kenyans that “all is well.”

Despite Odinga’s call for calm, a group of his supporters took to the streets to protest the results, chanting “No Raila, no peace.”

The protest, however, turned violent after police forces intervened and fired tear gas at the crowd.

At least one protester was killed as riot police opened fire during the clashes in Kisii County, said Leonard Katana, a regional police commander.

Kenyatta, 55, the son of Kenya’s first president after independence from British colonial rule, campaigned on a record of key infrastructure projects -- many backed by China – while claiming strong economic growth.

Odinga, 72, who is also the son of a leader of the independence struggle, presented himself as a champion of the poor as well as a fierce critic of corruption in the country.

Many voters, however, were expected to vote along ethnic lines.

Kenyatta is broadly regarded as the candidate of the nation’s largest ethnic group of Kikuyu, while Odinga is affiliated with the Luo voting bloc, which has never won a presidential race.

The top opposition candidate, who is making his fourth presidential run, has further accused his rival of stealing victory from him through vote rigging both in the 2007 and 2013 polls.

In 2007, the disputed election led to two months of ethnically-driven political violence that killed nearly 1,100 people and displaced 600,000 others.

The challenged poll in 2013 was referred to the courts, and ended largely peacefully even though Odinga emerged defeated.

Tensions have been high leading up to this year’s election since late last month, when Chris Msando, a key administrator of the biometric voting system, was murdered.

“We fear that this is the precise reason why Mr. Chris Msando was assassinated,” Odinga emphasized, pointing to his allegation of fraud.

Commissioner Roslyn Akombe said despite a request by an unnamed political party to halt releasing preliminary results, the body has decided to “continue to display the results.”