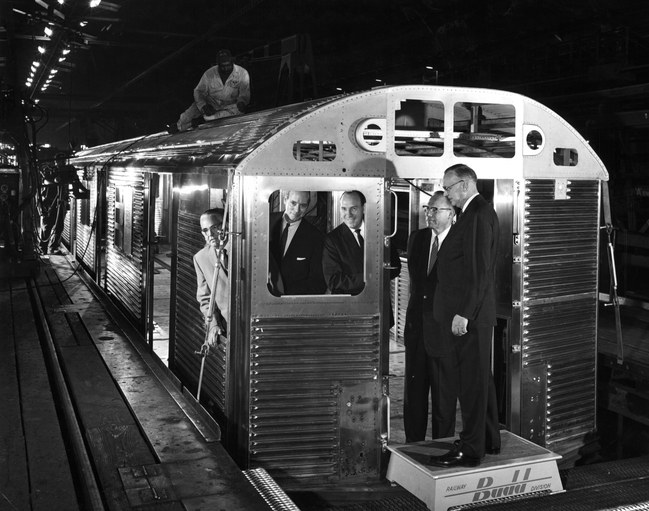 By 1965, six hundred had been built. With their brilliant corrugated bodies, they bore little resemblance to other cars. They were praised for having the clearest intercom system. Their plastic benches marked the end of gritty rattan-wicker seats. The R32 was the train of the future, offering a vision of what mass transit would look like in fifty years—literally, as it happens, because, against all odds, roughly two hundred of the original R32s still operate on New York City’s C, J, and Z lines. They are the oldest subway cars still in service in the city, and among the oldest still operating in the world.

Amid a year of perpetual delays, terrifying derailments, power blackouts that have left riders stranded underground and between stations for hours at a time, service changes so counterintuitive and so alien that they could have been devised by Kafka or M. C. Escher—not to mention the century-old tile peeling from the station walls, the mystery stalagmites and stalactites, the rusted support beams, the countdown clocks that seem to operate beyond the boundaries of time and space—the R32, once a forward-looking beacon for the Metropolitan Transportation Authority (which absorbed the New York City Transit Authority, in 1968), is now a symbol of its failure to update its technology and infrastructure. Many of the R32 cars have trouble maintaining their air-conditioning for the duration of their trips; they are usually switched out for newer cars during the summer months. Today, the mean distance between R32 failures is thirty-three thousand miles, meaning that they happen for those cars about thirteen times as often as they do for the newer R188 cars, which can go four hundred and thirty-six thousand miles without a mechanical failure.

The C line has been ranked the worst in the system by the Straphangers Campaign more often than any other subway line, a feat owed, in no small part, to the ancient cars that service it. Those frequent failures can create delays that ripple throughout the subway system.

In July of 2011, the M.T.A. published a preliminary budget for the next three years, noting that the R32 cars were “already well past the standard expected useful life of 40 years.” However, “structural defects” had led to the “accelerated retirement of R44 cars,” and so the R32 would have to stay in service, the report explained, until at least 2017. Barring any further delays, the cars are now expected to stay in service until 2019. In the meantime, extended construction on the L train’s Canarsie tube will entail increased service on the nearby lines, a task that will partially fall to the R32s.

That they are still in use at all is emblematic of the way the Metropolitan Transportation Authority has long operated: underfunded and saddled with the lofty task of carrying the entire city without pause, the M.T.A., by necessity, stretches everything long past its expiration date. According to a 2012 survey of the system, ninety per cent of the city’s stations have architectural or structural flaws. Knowledgeable observers have offered repair and upgrade timelines that stretch over half-century increments.

Costly patch jobs required to keep the old cars running further deplete funds that should be allocated to the primary culprit in subway delays: the signal system—the central nervous system of the M.T.A., responsible for controlling the movement of trains.

That system is still made up, for the most part, of prewar technology. The difficulty of securing funding and of scheduling repairs has helped keep it in place, along with the fact that the only way to update it would be through long service interruptions, which people hate. And so delays have become routine, and the necessary repairs have become lengthier to complete and more expensive than they might have been twenty-five years ago—when, according to the Times, the city first brought up the need to update the signal system.

That the R32s have endured through all this tells another story: they are genuinely a marvel of mid-twentieth-century engineering. They were based on a 1949 prototype by the Budd Company, in Pennsylvania, for a car called the R11, which was intended for a proposed Second Avenue subway line, the M.T.A.’s greatest and most famous delay. The Budd Company’s decision to build the new cars from stainless steel meant that each would be four thousand pounds lighter than its predecessor. And, even today, the R32s are more pleasant to ride, when they’re working, than the newer R160 cars that replace them during the summer. Their lights are a duller, softer white than those in the newer cars. Poles are located in the middle of the car, rather than jutting out from the seats, as they do in some later models. The R32 cars are the same width as those replacing them, yet they feel wider, more open. And there is no high-pitched dubstep squeal as an R32 leaves the station.

The Budd Company filed for bankruptcy in 2014, meaning that the R32s have not only outlasted their intended period of service but have outlasted their manufacturer. They have lived through eight mayoral appointments and ten Presidents. They are essentially your grandmother’s Volvo from the sixties, if that Volvo had millions of miles on its odometer and was responsible for getting your entire family to and from work, and if Volvo had gone out of business several years ago.

The R32 is, not surprisingly, a favorite of train nerds, as well as of subway professionals. All of the subsequent New York City subway cars—including the glitzy R179s slated to replace the R32s—owe much to their design. “When that car was brand-new, nothing before looked like that,” Giovan said. “But almost every car after it resembles it in some way.” And so, when the new trains of the future finally—finally—arrive, we’ll see glimmering steel machines with bright headlights, the direct descendants of a machine that lasted much longer than it ever should have been asked to.