TEHRAN, August 23 - American actor Robert De Niro, who once claimed he would like to “punch” US President Donald Trump in the face, has called him a “blatant racist.” 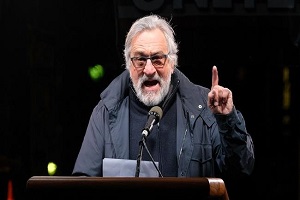 TEHRAN, Young Journalists Club (YJC) -The Hollywood actor took the jab at the US president in an interview with the online magazine Deadline on Tuesday.

"If he was smart, he'd be even more dangerous," De Niro said of Trump in the interview. "He's dangerous as it is. He's terrible, and a flat-out blatant racist and doubling down on that, and it's good that he does because he's going to sink himself."

The 74-year-old star said he would like to see his fellow actors speak out against Trump at the Emmy Awards next month, adding that there should be some balance so the criticisms do not overshadow the ceremony.

“Even at the Emmys it should be a kind of theme in some way — however, you know, balanced it could be so we’re not making it all about that," he said.

"But at this point, we’re at a crisis in this country with this fool, who never should have gotten into the position that he’s in," he noted.

Trump’s handling of the racially charged clashes at the August 12 rally in Charlottesville sparked a political firestorm and drew sharp rebukes from members of Congress, military leaders and major business executives.

The president equivocated in denouncing the white supremacists and neo-Nazis and cast blame on “both sides” for the violence that left one woman dead and 20 others injured when a suspected Nazi sympathizer rammed his car into the counter-protesters.