TEHRAN, August 24 - Hundreds of thousands of Yemenis have taken to the streets of Sana’a to voice their outrage at a recent Saudi air raid, which hit a hotel north of the capital and claimed nearly 50 civilian lives. 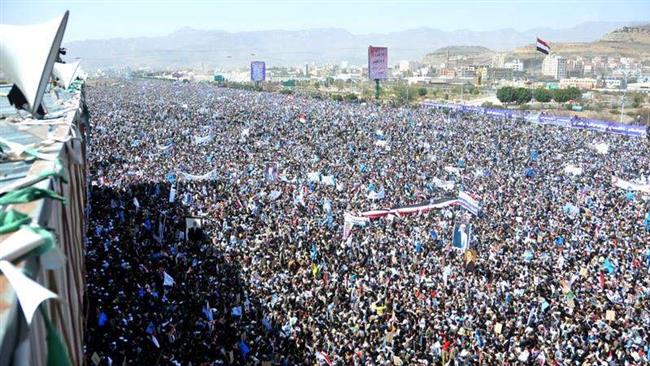 TEHRAN, Young Journalists Club (YJC) - On Thursday, demonstrators gathered on the capital’s Sabaeen Square in support of ex-president, Ali Abdullah Saleh, who has joined forces with the Houthi Ansarullah movement in defending the country against Saudi aggression.

The demonstrators came from different provinces across the country to the capital city to mark the 35th anniversary of the founding of National People Congress Party of Saleh.

A parallel demonstration was also held in the capital by a large group of Ansarullah supporters.

The rallies were held a day after Riyadh’s warplanes targeted a hotel in the Arhab district of Sana’a Province, leaving dozens of civilians dead and injured.

According to the figures released on Wednesday night by local Red Crescent Societies, rescuers had pulled 48 identifiable bodies from what is left of the hotel. The death toll is feared to rise as the search is ongoing.

The demonstrators condemned the brutal Saudi aggression against their country. They also slammed Saudi Arabia’s blockade of Yemen that has caused severe food and medicine shortages and led to fast-spreading epidemics.

To ensure security during the Monday events, fighters of the Ansarullah movement had set up checkpoints at the main entrances to the city.

On Monday, Saleh stressed his resolve to continue cooperation with the Houthi Ansarullah movement in the country to counter the Saudi-led war on Yemen.

Saleh also said that Saudi Arabia had been targeting Yemen’s sovereignty and independence with the military campaign, stressing that the Yemeni nation would not surrender or accept any parties’ dictates.

Saleh and the Houthis have been in alliance almost since the Saudi-led war began on their country in March 2015.

The war was launched in an attempt to eliminate the Houthis and reinstall Saleh’s Riyadh-friendly successor, Abd Rabbuh Mansur Hadi, who resigned in 2014 and fled to Riyadh before returning to Aden.

The Houthi Ansarullah fighters, allied Yemeni army factions, and forces loyal to Saleh have been jointly fighting back the Saudi-led invaders.

And Saudi Arabia has attained neither of its objectives despite spending billions of dollars on the war and enlisting the cooperation of dozens of its vassal states as well as some Western countries.

The Saudi-led war, which has been accompanied by a naval and aerial blockade on Yemen, has so far killed over 12,000 people in the impoverished state, left 70 percent of the country’s 27 million population in desperate need of humanitarian aid, and caused the worst cholera outbreak in the world there.