‘All options’ remain on the table on North Korea: Trump

TEHRAN, August 29 - US President Donald Trump said “all options” regarding North Korea remain on the table, ratcheting up his war of words against the Asian nation. 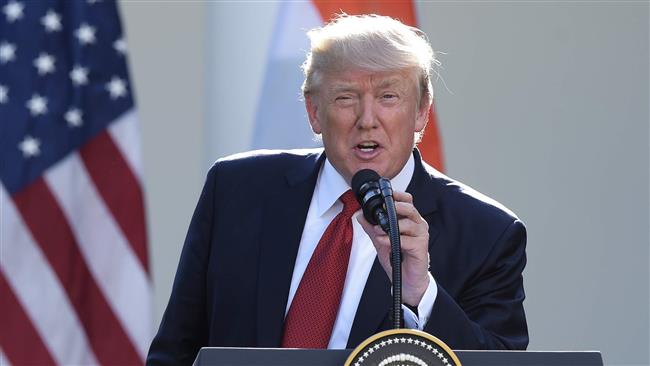 TEHRAN, Young Journalists Club (YJC) - Trump said in a statement on Tuesday the world has received North Korea's latest message "loud and clear," after the country launched a ballistic missile over neighboring Japan.

"This regime has signaled its contempt for its neighbors, for all members of the United Nations, and for minimum standards of acceptable international behavior," Trump said.

"Threatening and destabilizing actions only increase the North Korean regime’s isolation in the region and among all nations of the world. All options are on the table," he said.

Trump's comments come after the US military confirmed on Monday night that North Korea fired a ballistic missile that flew over Japan's airspace.

“The two leaders agreed that North Korea poses a grave and growing direct threat to the United States, Japan, and the Republic of Korea, as well as to countries around the world,” according to the White House.

Hours before the Japanese prime minister called for a United Nations Security Council meeting over North Korea's provocative move, describing it as an "unprecedented, serious and grave threat."

"Their outrageous act of firing a missile over our country is an unprecedented, serious and grave threat and greatly damages regional peace and security," he told reporters in Tokyo on Tuesday.

In response of Trump’s dire warnings, North Korea said it was "carefully examining" a plan to strike the American Pacific territory of Guam with missiles.

The North Korean military said it could carry out a pre-emptive strike if there were signs of an American provocation.

The US is against North Korea’s nuclear weapons but Pyongyang says it will not give up on its nuclear deterrence unless Washington ends its hostile policy toward the country and dissolves the US-led UN command in South Korea. Thousands of US soldiers are stationed in South Korea and Japan, Presstv reported.