TEHRAN, September 6 - The US envoy to the UN says President Donald Trump’s possible refusal to certify Iran’s compliance with its nuclear deal does not constitute US withdrawal from the agreement. 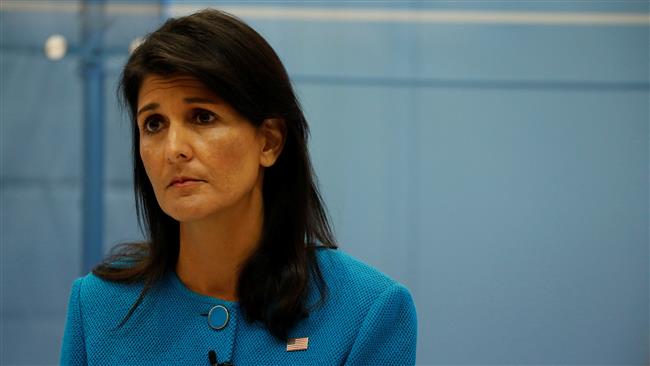 TEHRAN, Young Journalists Club (YJC) - “If the president chooses not to certify Iranian compliance, that does not mean the United States is withdrawing from the JCPOA (Joint Comprehensive Plan of Action),” Nikki Haley said at the American Enterprise Institute in Washington on Tuesday, despite the US administration’s repeated threats that it would scrap the deal.

“If the president finds that he cannot certify Iranian compliance, it would be a message to Congress that the administration believes either that Iran is in violation of the deal, or that the lifting of sanctions against Iran is not appropriate and proportional to the regime’s behavior, or that the lifting of sanctions is not in the US national security interest, or any combination of the three,” she added.

The remarks came after the International Atomic Energy Agency (IAEA) verified Iran’s compliance with the JCPOA in its latest quarterly report on Thursday.

Haley described the JCPOA as a “very flawed and very limited agreement” that was “designed to be too big to fail.”

Last week, Trump administration sent Haley to Vienna to lobby with the IAEA to request access to Iranian military sites as part of the deal.

Iran has repeatedly contended that the US demands for access to Iran’s military sites are aimed at politicizing the JCPOA and that issues pertaining to Tehran’s defense capabilities are non-negotiable.

Trump has also set up a team of his White House confidantes to present him with “options” other than certifying Iranian compliance with the deal to the Congress. Such certification is needed by US law every 90 days in order for the Congress to continue to withhold nuclear-related sanctions against Iran.

The White House has been further pressuring US intelligence officials to produce intelligence that could be used to declare Iran in violation of the nuclear agreement.

Trump, who had made no secret of opposing Iran in his election campaign, has threatened to “tear up” the agreement, calling it “the worst deal ever negotiated.”

The JCPOA was inked between Iran and the P5+1 countries — namely the US, Russia, China, France, and Britain plus Germany — in July 2015 and took effect in January 2016.

Under the deal, limits were put on Iran’s nuclear activities in exchange for the removal of all nuclear-related bans imposed on the Islamic Republic, among other things.

Unlike the US, the European parties to the nuclear deal as well as Russia and China have never raised any complaints about the agreement with Iran and have stressed full commitment to it.