US won’t say whether considering sanctions against Myanmar

TEHRAN, September 8 - The United States has expressed concerns about the deadly violence against Rohingya Muslims in Myanmar but refused to address calls for international sanctions against the country. 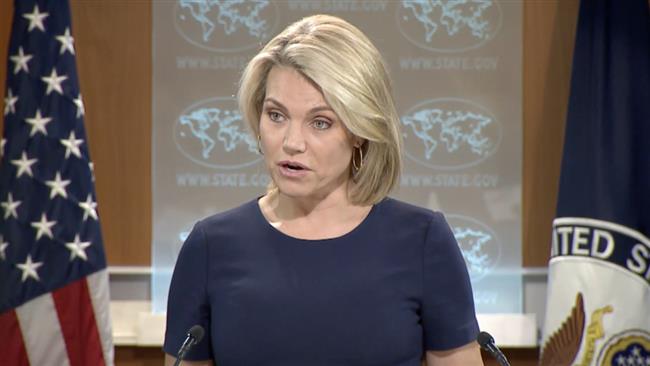 TEHRAN, Young Journalists Club (YJC) -"We don't want to get ahead of the conversations that we're having,” State Department spokeswoman Heather Nauert told reporters in Washington, DC, on Thursday.

Myanmar’s security forces and armed Buddhist militants have been carrying out atrocities against Rohingya Muslims in the Muslim-majority Rakhine region in Myanmar for several months.

According to multiple reports, entire villages of Rohingya Muslims have been burnt to the ground. A large number of Muslims, including women and children, have been burnt alive, lynched to death or lost their lives while fleeing the ethnic cleansing of the Rohingya people.

The State Department spokeswoman on Thursday urged Myanmar’s authorities to allow humanitarian access to Rakhine state but said US officials could not find the reports of state-sponsored massacres credible.

"The United States is deeply concerned about the troubling situation in Burma's northern Rakhine state," Nauert told reporters.
"There has been a significant displacement of local populations following serious allegations of human rights abuses including mass burnings of Rohingya villages and violence conducted by security forces and also armed civilians," she said.

"We again condemn deadly attacks on Burmese security forces, but join the international community in calling on those forces to prevent further attacks on local populations in ways that are consistent with the rule of law and with full respect for human rights,” she said.

According to the United Nations, more than 250,000 Rohingyas have fled to neighboring Bangladesh since violence erupted in Rakhine state in October.

The refugees say their villages are being raided and burned by the country’s security forces and by extremists who call themselves Buddhist nationals. They tell stories of the indiscriminate killing of civilians.

The extremists frequently attack Rohingyas and have set fire to their homes in several villages in Rakhine. Myanmar’s armed forces allegedly provided the fanatics containers of petrol for torching the houses of Muslim villagers, who were then forced to flee.
Exhausted and desperately hungry refugees arriving in already packed camps in Bangladesh have brought harrowing tales of murder, rape and widespread arson.

"We call on the authorities to facilitate immediate access to affected communities that are in need of urgent humanitarian assistance," Nauert said, adding that US officials are working to help the United Nations cope with the exodus.

But Nauert said she would not comment on who is at fault in the latest violence. She refused to blame Myanmar’s de facto ruler Aung San Suu Kyi over her complicity in the ethnic cleansing of Rohingya Muslims.

Nauert said US diplomats are in regular touch with Myanmar’s government but added that Rakhine is "a difficult place to get information from, it's difficult to get access to."
"Some of these areas are areas of open conflict, we can't necessarily get in there," she said.

Peace activists have launched an international campaign calling on Nobel Peace Prize Committee to take back its 1991 prize to Suu Kyi over her complicity in the crime.

The petition launched at change.org has already been signed by 375,974 supporters.
More than a dozen Nobel laureates wrote an open letter to the UN Security Council in December last year warning of a tragedy “amounting to ethnic cleansing and crimes against humanity” in Rakhine state, citing the “potential for genocide.”