TEHRAN, October 2 -A Toronto lawyer, a Sikh man of Indian origin, has been elected as head of Canada’s New Democrats, the first time a non-white politician rises to lead a major political party in the North American state. 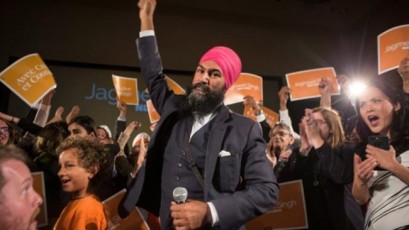 TEHRAN, Young Journalists Club (YJC)-Jagmeet Singh, a member of Ontario’s provincial legislature, was elected in a resounding victory on Sunday as the leader of left-leaning New Democrats Party, Canada’s third biggest political party after Trudeau’s Liberals Party and the Conservatives.

He secured 53.6 percent of the vote in a race against three political rivals according to the vote results.

Under Singh’s leadership, New Democrats would challenge Trudeau’s Liberals in the 2019 federal elections.

After the results were announced, Singh took to twitter and described the victory as an “incredibly profound honor.”

“Thank you, New Democrats. The run for Prime Minister begins now,” Singh wrote. “That’s why today, I’m officially launching my campaign to be the next Prime Minister of Canada.”

The premier congratulated him in a tweet, saying, “I look forward to speaking soon and working together for Canadians.”

The 38-year old lawyer does not have a seat in the federal parliament and will have to win one in a special election, which requires the resignation of an elected official to give him a place in a constituency.

Singh, who has never held power federally, will also need to persuade the voters that his party can form a government. His New Democratic Party has currently 44 of 338 seats in the parliament.

Singh was born into a Punjabi Indian family in Ontario. He was working as a criminal defense lawyer in the Greater Toronto Area before entering politics.

His is a member of Sikh minorities, which account for roughly 1.4 percent of Canada’s population.