TEHRAN, October 6 -Iran’s UN envoy has spoken against any imposition of unilateral economic sanctions against world nations, saying such “coercive” restrictive measures would leave a negative impact on developing countries and the entire global economic cooperation. 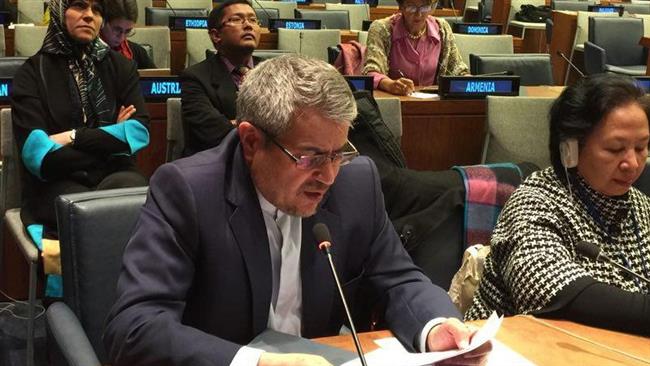 TEHRAN, Young Journalists Club (YJC) - Gholam-Ali Khoshroo, Iran’s Ambassador and Permanent Representative at the UN, made the remarks in an address to the Second Committee of the UN General Assembly, IRNA reported on Friday.

“Multilateralism remains to be the best and primary option for an international trading system to act as a fundamental driver of economic and social transformation,” he said, adding, “It provides a framework of rules, regulations, and guidelines to which all members should adhere to.”

Khoshroo further said, “The Islamic Republic of Iran, which has been experiencing economic coercive measures, remains opposed to the application of unilateral economic and trade measures against other countries.”
Application of such measures, he said, “affects the sustainable development efforts of developing countries and generally has a negative impact on international economic cooperation as well as worldwide efforts to move towards a non-discriminatory and open multilateral trading system.”

By achieving one of the highest global growth rates last year, Iran has proven that it could become one of the world’s most vibrant emerging economies within the next 20 years, with a trillion-dollar growth potential, said the senior diplomat.

According to the World Bank, Iran’s gross domestic product stood at USD 412.2 billion in 2016, the first half of which saw its economy growing by 7.4 percent.

“Our strategic choice for achieving such sustainable and balanced growth is extensive global partnership,” the envoy stated.

Since Iran’s 1979 Islamic Revolution, which put an end to the monarchical rule of the US-backed Pahlavi regime, Washington has used unilateral sanctions as a tool to put economic pressure on the Iranian nation.

Iran was also subject to a series of US-backed international bans over its civilian nuclear program, but those sanctions were lifted when Tehran and the P5+1 states – the US, Russia, China, France, Britain and Germany – reached a deal in 2015 on the Iranian nuclear work.

However, the new US administration has been actively seeking ways to undermine the accord.

Earlier in the year, US President Donald Trump urged Europeans not to do business with Iran in an attempt to torpedo much of what the agreement could award Iran in terms of economic interaction.

Since his inauguration, Trump has also imposed repeated rounds of sanctions against Iranian individuals and institutions over the Islamic Republic’s missile program, though the missile work is not in contravention of the agreement.