N. Korea unlikely to give up nukes if Iran deal fails – German FM

TEHRAN, October 10- German Foreign Minister Sigmar Gabriel has warned the US against breaking the nuclear deal with Iran, since it would make North Korea unlikely to agree to any international deals concerning its nuclear program. 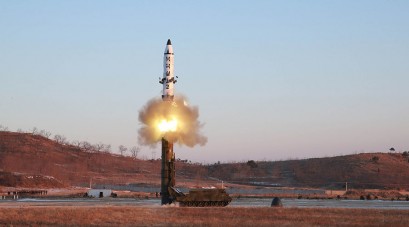 TEHRAN, Young Journalists Club (YJC) -German Foreign Minister Sigmar Gabriel has warned the US against breaking the nuclear deal with Iran, since it would make North Korea unlikely to agree to any international deals concerning its nuclear program.

“Our big concern is, with regard to North Korea, that it is very unlikely the North Korean dictatorship is ready to agree to an international agreement to renounce the building of nuclear weapons if the only agreement in the world that has allowed such a renunciation is at the same time called into question,” Reuters quoted Gabriel as saying.

US President Donald Trump, however, doesn’t seem to be eager to negotiate with North Korea, as he claimed on Monday that his country has given “billions of dollars” to Pyongyang and received nothing in return. US negotiators were only made look like “fools” for 25 years, according to Trump.

“Sorry, but only one thing will work!” Trump tweeted Saturday, implying a military solution to the Korean Peninsula standoff.

On Monday, US Defense Secretary James Mattis elaborated on Trump’s vague remark, saying the US army should be ready for “military options” at the president’s disposal.

"There is one thing the US Army can do and that is you have got to be ready to ensure that we have military options that our president can employ if needed," Mattis said at the annual US Army meeting.

At the same time, he added that Washington is currently “in a diplomatic-led effort,” stressing that the UN Security Council has unanimously voted to impose stronger sanctions on Pyongyang twice in a row.

Going back on the deal would also worsen the international security situation, Gabriel stressed.

According to Gabriel, Berlin is ready to increase diplomatic pressure on Iran, but “we do not want to see this agreement damaged.”

Gabriel has repeatedly urged the US to comply with the deal, stressing that breaking it would only jeopardize international security. On Sunday, he said that the “world will change” if Washington backs out of the agreement, since it would mean the US “replacing the rule of law with the law of the strongest.”

The nuclear deal with Iran, officially known as the Joint Comprehensive Plan of Action (JCPOA), was signed in 2015 by the P5+1 group (China, France, Germany, Russia, the UK, and the US) and the European Union. While Tehran agreed to limit its nuclear program for 15 years, the international community promised to ease the pre-existing sanctions imposed on the country.

On Monday Gabriel echoed the statement made in September by Russian Foreign Minister Sergey Lavrov, after the UN General Assembly in New York.  Lavrov urged the US to resolve issues with Iran through channels specifically designed for this purpose, and to abstain from attempts to bring down the nuclear deal with Tehran.

“The [Iran] program is in a state of completion; it was approved in a UNSC resolution, and dissecting this program equates to destroying everything achieved. Everyone understands that,” he said. “If the agreement on the Iranian nuclear problem fails, North Korea will say: why should we negotiate with you, if you’re unable to do so?” he asked.

Iran just test-fired a Ballistic Missile capable of reaching Israel.They are also working with North Korea.Not much of an agreement we have!

Dismantling of the nuclear deal was one of the main points of Donald Trump’s presidential campaign. During his presidency he has repeatedly accused Tehran of breaking the “spirit” of the deal. As the October 15 deadline to re-certify the agreement approaches, concerns grow that Trump might keep his campaign promises and back out of the deal brokered by the Obama administration.

Russia has recorded the second above 6000 infected coronavirus cases day

A Time for Renewal: Global call for boosting UN system amid 75 anniversary

US illegally ‘snaps back’ illegal sanctions on Iran

Russia has recorded the second above 6000 infected coronavirus cases day