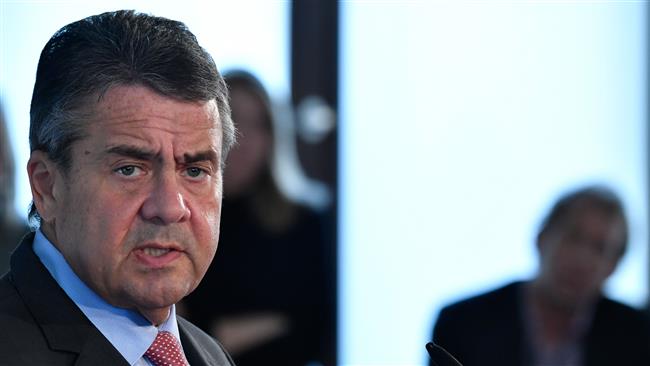 TEHRAN, Young Journalists Club (YJC) - “It’s imperative that Europe sticks together on this issue,” Gabriel, a Social Democrat, told the RND German newspaper group on Thursday. “We also have to tell the Americans that their behavior on the Iran issue will drive us Europeans into a common position with Russia and China against the USA.”

The comments came amid speculation that Trump was going to unveil a broad strategy on confronting Iran on Friday, in part by refusing to certify Tehran's commitment to the nuclear deal with the P5+1 group of nations—the US, the UK, France, China, Russia and Germany.

Under the deal, known as the Joint Comprehensive Plan of Action (JCPOA), the Islamic Republic agreed to put certain restrictions on its peaceful nuclear program in exchange for the removal of all nuclear-related sanctions.

Having called the agreement an “embarrassment” and the “worst deal ever negotiated,” Trump has desperately sought a pretext to scrap or weaken the JCPOA and get rid of the limits it imposes on Washington’s ability to pursue more hostile policies against Tehran.

Senior US officials, European leaders and prominent US lawmakers on both sides of the aisle have advised Trump against the move, saying it would leave the US isolated, concede the diplomatic high ground to Tehran, and ultimately endanger the landmark agreement.

The International Atomic Energy Agency (IAEA) has on a number of occasions confirmed Iran’s adherence to the terms mandated by the deal.

Trump’s refusal to certify Iran’s commitment would leave it to a reluctant Congress to decide whether the sanctions relief should be extended.

Gabriel said Thursday that Washington was treating the JCPOA “like a football” and this could lead to serious consequences like drawing a wedge between Europe and the US.

Noting that only the US, Russia and China could avert a new nuclear arms race, Gabriel said, “It must be in our interest to press for more trust.”

The German foreign minister had urged the White House on Monday not to jeopardize the JCPOA, warning that such a move would undermine the Middle East’s stability.