N. Korea threatens Australia with ‘disaster’ for engagement in US ‘war preparations’

TEHRAN, October 15 - Pyongyang has threatened Australia with “disaster” unless the island nation abandons its allegiance with the US interests. Canberra however said it will not be “cowed” by threats and will continue to do everything to “protect and help” its allies. 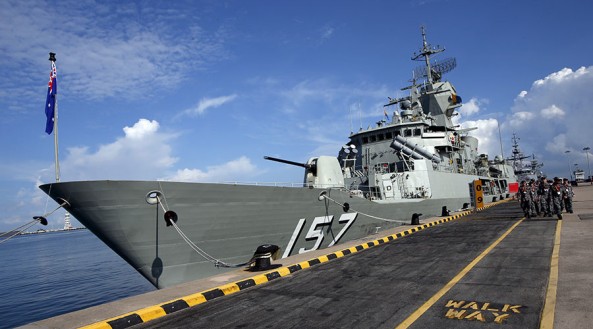 TEHRAN, Young Journalists Club (YJC) -Pyongyang has threatened Australia with “disaster” unless the island nation abandons its allegiance with the US interests. Canberra however said it will not be “cowed” by threats and will continue to do everything to “protect and help” its allies.

“Should Australia continue to follow the US in imposing military, economic and diplomatic pressure upon the DPRK [Democratic People’s Republic of Korea] despite our repeated warnings, they will not be able to avoid a disaster,” KCNA warned on Saturday quoting a spokesman for the Foreign Ministry.

Stressing that North Korea regards Australia’s “frantic engagement”with Washington a “hostile” act against the Democratic People's Republic of Korea (DPRK), the Ministry accused Canberra of “zealously joining frenzied political and military provocations of the US.”

The statement specifically condemned Australian Foreign Minister Julie Bishop’s support for US policies, which she apparently exhibited during a visit to the Panmunjom village on October 11 with Defence Minister Marise Payne.

The village lies just north of the de facto border between North and South Korea in the Demilitarized Zone (DMZ). Addressing the press there, the ministers urged Pyongyang to abandon its nuclear weapons tests and missile program, while calling on the diplomatic community to step up pressure on North Korea.

Pyongyang believes that Australia is also ready to help the US and its allies militarily. Recalling the placement of some 1,250 US Marines to Darwin, in the far north of Australia, in April for a six-month deployment, North Korea claimed that Australian forces practiced for “amphibious landings” in North Korea.

In addition, Australia is about to start a process of equipping its naval fleet with missile defense systems to counter North Korean rockets. Under the current government shipbuilding strategy, Canberra is investing AU$89 billion (US$70 billion) to produce 12 new submarines, 12 offshore patrol vessels and nine new frigates, which will be equipped with the Lockheed Martin Aegis combat management system.

North Korea said it was under the impression that Australia is “preparing for a war on the Korean Peninsula,” and advised it to stay away from “reckless remarks and conducts” in support of the US so-called “military option.”

Pyongyang believes that Australia is “allowing themselves to be exploited by Trump's selfish 'America First Policy' at the cost of their own national interests.”

Responding to Pyongyang’s threats, the minister for defense personnel, Dan Tehan, told Sky News on Sunday that Australia “will not be cowed by the North Koreans, we will continue to do all we can to protect and help and support our allies.”

The USS ‘Michigan’, a nuclear-powered ballistic missile submarine, arrived in the South Korean port of Busan earlier this week. Next week, the Ohio-class submarine will be joined by Burke-class guided missile destroyers, USS ‘Stethem’ and USS ‘Mustin Arleigh’.

Together with Nimitz-class nuclear-powered supercarrier USS ‘Ronald Reagan’, the US flotilla is expected lead the join the naval drill with its regional allies, scheduled for October 16-26 in the Sea of Japan (known as the East Sea in the Koreas) and the Yellow Sea.The drills off the Korean Peninsula will begin amid heightened tensions around Pyongyang's nuclear and missile test launches. North Korea conducted its sixth nuclear test on September 3, forcing the UN Security Council to introduce new sanctions. The UN actions, however, did not stop Pyongyang from launching a series of ballistic missiles later in September, while vowing to destroy the US and their allies with nuclear weapons if attacked.