TEHRAN, October 19 - US Ambassador Nikki Haley’s push to derail a UN Security Council meeting on the situation in the Middle East towards Iran’s nuclear deal has been met with backlash as most of the participants seek to focus on Israeli-Palestinian issues, especially Israel's illegal settlements in the West Bank. 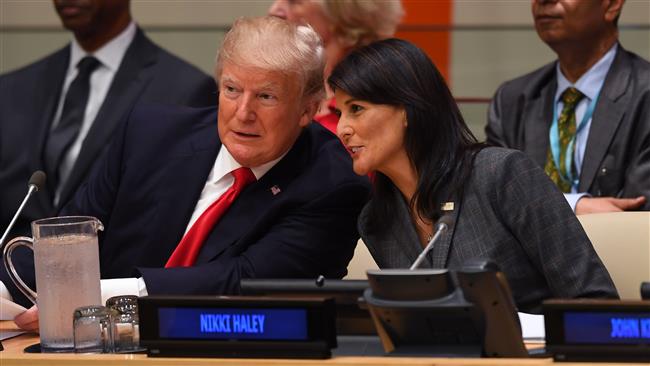 TEHRAN, Young Journalists Club (YJC) -US Ambassador Nikki Haley’s push to derail a UN Security Council meeting on the situation in the Middle East towards Iran’s nuclear deal has been met with backlash as most of the participants seek to focus on Israeli-Palestinian issues, especially Israel's illegal settlements in the West Bank.

During the meeting on the situation in the Middle East on Wednesday, Haley urged the Security Council to adopt President Donald Trump's toughening position on Tehran, but the call failed to draw any support, apparently indicating that Trump's "comprehensive approach" is alienating allies and leaving the US isolated internationally.

Haley said that the Security Council as a whole is taking a "dangerously short-sighted approach" by only looking at compliance with the nuclear provisions, adding that "this council now has the opportunity to change its policy."

The meeting was held a few days after Trump refused to formally recertify that Iran is complying with the deal, known as the Joint Comprehensive Plan of Action (JCPOA), and warned that he might ultimately terminate the agreement. While Trump did not pull Washington out of the nuclear deal, he gave the US Congress 60 days to decide whether to reimpose economic sanctions against Tehran that were lifted under the pact. Reimposing sanctions would put the US at odds with other signatories to the accord, including the European Union, which has sharply criticized Washington's decision about the deal.

Russian Ambassador Vassily Nebenzia said he wondered if “some delegates” were confused about the agenda item, emphasizing that the Middle East debate is aimed at tackling the Israeli-Palestinian conflict. He reminded Haley that she did not even mention the word Palestine.

“The fact that some delegations did not mention the word ‘Palestine’ saddens us,” he said.

Nebenzia warned that "attempts to dismantle the architecture of the agreement on the Iranian nuclear program will lead to a negative reaction in the Middle East and beyond."

Olof Skoog, Sweden’s ambassador to the UN, highlighted that Europe’s position has not changed since Trump’s speech, stressing that the Middle East debate should focus on the so-called peace process and not the nuclear deal.

“The nuclear agreement is underpinned by UN Security Council resolutions. It’s clear where we stand... The EU is determined to preserve the JCPOA as a key pillar of the international nonproliferation architecture,” Skoog said.

Britain's Deputy Ambassador Jonathan Allen stated that the UK supports the Iran nuclear deal, saying, "We encourage careful consideration of the implications to the security of the US and its allies before taking any steps that might undermine the JCPOA, such as re-imposing sanctions on Iran lifted under the agreement."

Moreover, Iran's Ambassador Gholamali Khoshrou hit back as Haley, telling her that she provided "the wrong address when it comes to the root causes of insecurity in the Middle East," noting that at the "core" of the all conflicts in the Middle East is Israel's "occupation of the Palestinian land."

"The new US administration's approach and the recent dangerous strategy toward the (nuclear) deal and Iran run counter to all of these efforts and are intended to add another crisis to the regional issues," Khoshrou added.

France did not mention the Iran nuclear deal, and warned against downplaying the importance of a Israeli-Palestinian deal to foster stability in the Middle East. France’s Ambassador François Delattre said before the hearing, "For others it’s also a great opportunity to focus precisely on the peace process, what needs to be done, and settlement activity."

Japan's representatives also reiterated that Tokyo will continue to support the Iran accord, urging all of the participating nations to continue to abide by its provisions.