Iraq’s Abadi in Turkey for talks on Kurds 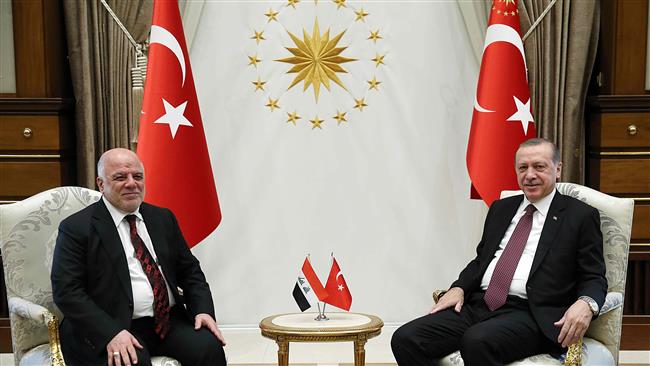 Iraq has harshly criticized the Kurdistan Regional Government (KRG) for holding a referendum of independence on September 25. Neighbors Turkey and Iran have expressed similar worries, saying the move would further complicate the security situation in Iraq and in the entire Middle East.

Erdogan also said that Turkey and Iraq were discussing a possible move to close down Turkey’s borders with Kurdistan, which could have a massive impact on the economy of the Kurdish territory.

For his part, Abadi again condemned the KRG for holding the referendum, saying the move was meant to impact Iraq’s territorial integrity.

“With the referendum they tried to break up our territory, they tried to redefine our borders,” Abadi said.
The Kurdish referendum seems to have helped Iraq and Turkey rebuild ties that had been strained over political and military developments in the region over the past years. Baghdad had repeatedly lambasted Ankara for its uncoordinated purchase of the Kurdish oil. The two had also clashed over Turkey’s deployment of a contingent of troops to areas north of Mosul last year when Iraq was busy fighting the Daesh Takfiri terrorist group in the area.

During his meeting with Erdogan, Abadi also touched upon the issue of Iraqi paramilitary forces, known as the Hashd al-Sha’abi, saying they have been a major help in Iraq’s battle against terror over the past years.

Abadi again dismissed US Secretary of State Rex Tillerson’s call for dismantling the Popular Mobilization Forces. “The PMF, today, is a part of the state’s security apparatus based on a law approved by the parliament,” he said.

Abadi was also to meet his Turkish counterpart Binali Yildirim later on Wednesday.