TEHRAN, October 30 -Philippines President Rodrigo Duterte, who has been notoriously critical of the US, has said he would welcome US President Donald Trump “as an important leader” when the two heads of state meet in November. 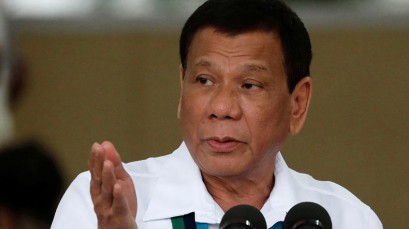 TEHRAN, Young Journalists Club (YJC) -Philippines President Rodrigo Duterte, who has been notoriously critical of the US, has said he would welcome US President Donald Trump “as an important leader” when the two heads of state meet in November.

“I would deal with President Trump in the most righteous way, welcome him as an important leader,” Duterte told journalists ahead of his visit to Japan, where he is scheduled to meet with Prime Minister Shinzo Abe. “I would have to also listen to him, what he has to say,” the Philippines leader said, as cited by Reuters.

Duterte said he expects to discuss issues such as “terrorism, cooperation between the two countries [and] the fight against drugs” during his meeting with Trump. However, earlier, the US Ambassador to Manila, Sung Kim, told reporters the two leaders would also likely discuss human rights and the rule of law, which remain controversial issues in light of Duterte’s debatable war on drugs policy.

The Philippines president himself said the November talks would be particularly focused on the North Korean nuclear question. "The opening agenda would be North Korea. We are worried, all of us, that if anything can go wrong, it will go wrong," he said, as cited by the Philippines ABS-CBN broadcaster.

“A nuclear war is totally unacceptable to everybody,” Duterte added. “Tell him that nobody’s threatening him [Kim Jong-un], that there would be no war and that if you can just tone down or stand down, stop the threats, and that would be the same for America.”

He said the only “country that can calm him [Kim Jong-un] down is China.” Earlier, the Philippines president referred to the North Korean leader as a “fool” and “son of a b*tch,” who is “playing with dangerous toys.”

The outspoken Philippines leader has, in the past, not held back from criticizing the US. A year ago, he announced a “separation” from the US in favor of realignment with China. Later, Duterte slammed Washington for treating his country “like a dog.” In July this year, he called the US “lousy” and vowed that he would “never” go to the US during his term, “or even thereafter.”

However, three weeks later, the very candid Philippines leader had a sudden change of heart, calling himself a “humble friend” of Washington while meeting US Secretary of State Rex Tillerson. He also seems to have better relations with Trump than he had with Barack Obama.

Duterte called Trump a “deep man” and claimed he wouldn’t have become a billionaire if he was “stupid.” Trump, in his turn, praised the Philippines president in May for doing “unbelievable job on the drug problem” despite criticism of Duterte’s brutal drug crackdown by human rights groups.

In late September, Duterte once again confirmed his readiness for a new policy in relations with Washington by praising the US as an important security ally. He described all his previous anti-US tirades as “water under the bridge.”

Trump is expected to land in the Philippines on November 12 for a two-day visit as part of his Asian trip, scheduled for November 3-14. He will be in Manila after visiting Japan, South Korea, China, and Vietnam.