TEHRAN, November 2- Chinese President Xi Jinping has reportedly responded to a message by the North Korean leader, hoping that Beijing and Pyongyang could enhance their relations, months after Beijing introduced strict restrictions on bilateral ties in response to Pyongyang’s contentious missile and nuclear programs. 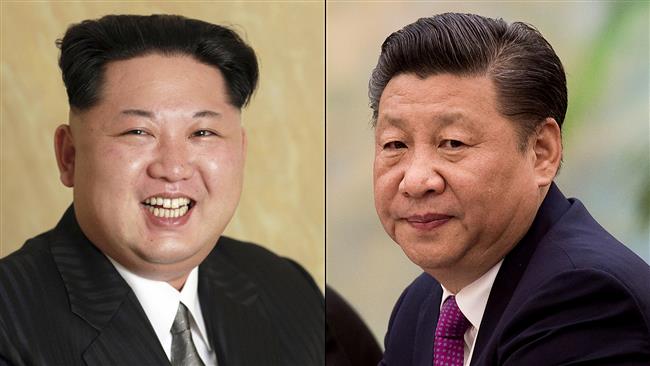 “I wish that under the new situation, the Chinese side would make efforts with the DPRK (North Korea) side to promote relations between the two parties and the two countries to sustainable soundness and stable development and thus make a positive contribution to... defending regional peace and stability and common prosperity,” the KCNA quoted Xi as saying in his message to Kim.

Xi’s message was in reply to a congratulatory letter Kim had sent to the Chinese leader at the end of China’s Communist Party Congress last week, when Xi was reappointed China’s leader.

In his letter to Xi, dated October 25, Kim had wished the Chinese leader “great success” in his future tasks, hoping that bilateral ties would develop “in the interests of the peoples of the two countries.”

Exchanges of personal messages between the leaders of the two countries have been rare. Back in May last year, Xi sent a congratulatory letter to Kim on his appointment as the chairman of the ruling Workers’ Party of Korea.

The recent high-level communication was the first of its kind since China halted North Korean coal imports, banned new investments in North Korea, and stopped importing iron, seafood, and lead from the country some nine months ago.

Last month, China’s major banks also suspended financial transactions for North Korean clients after the United Nations Security Council imposed a new round of sanctions against Pyongyang over its latest nuclear test back in early September.

Nevertheless, Beijing remains Pyongyang’s closest and largest commercial partner, purchasing some 83 percent of the North’s exports and selling 85 percent of the goods imported by the peninsular country.

But China has also had reservations about North Korea’s rapidly advancing missile and nuclear programs.

China has also been under pressure by the international community, particularly by the United States, to use its influence on the North as leverage to convince Pyongyang to halt those programs. Beijing says statements of China’s outsize influence on North Korea are inaccurate.

North Korea is under international pressure over its missile and military nuclear programs and has been subjected to an array of harsh sanctions by the UN Security Council. However, Pyongyang says it needs to continue and develop the programs as a deterrent against hostility by the US and its regional allies, including South Korea and Japan.

The US has substantial military presence in the region and has several times threatened North Korea with military action.