Those reporting rise in US anti-semitism can’t ‘be trusted,’ says Rabbi Weiss

TEHRAN, November 5 -Rise anti-semitic incidents in the United States cannot “be trusted” as it is reported by Zionists, says Rabbi Yisroel Dovid Weiss. 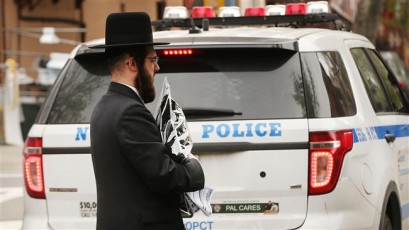 The spokesman for the international branch of Neturei Karta, an anti-Zionist group, debunked an earlier report by the Anti-Defamation League (ADL) in an interview with Press TV on Saturday, arguing that the source pursues Zionist objectives.

“All these organizations that supposedly represent Judaism and especially the ADL are Zionist organizations and everything they say are not to be trusted,” Weiss said.

Zionism vs. Judaism: A differentiation

The anti-Zionist activist further argued that even if the report is true the main cause of anti-semitism across the globe is the Zionist regime of Israel and its supporters.

“They are the cause; Zionism and the state of Israel are the direct cause of the exacerbation of anti-semitism,” he said. “Zionism is the hijacking of Judaism.”

The rabbi also noted that the Israeli regime is boosting anti-semitism worldwide by adopting Jewish symbols and calling itself the “Jewish State” on the one hand, and making the people “angry” by its policies, on the other.

“People around the world think that Jews around the world support this Zionist state; they don’t know [how] to differentiate between Judaism, the religion, and Zionism that calls itself the ‘Jewish State’.”

The Brooklyn-based rabbi offered a solution to anti-semitism by calling on all Jews to acknowledge that “we have nothing to do with this illegitimate movement of Zionism that causes the rift between the Jewish people and others.”

The Israeli regime, meanwhile, keeps taking expansionist measures in Palestine while getting engaged in atrocities against the Muslim nation.

The US-based ADL considers Neturei Karta as being on "the farthest fringes of Judaism" while members of the anti-Zionist group believe that they are the “true Jews.”