TEHRAN, November 5 -A recently conducted opinion poll shows that 94.5 percent of Iranians do not trust the United States which has held no diplomatic relations with Tehran since the 1979 Islamic Revolution. 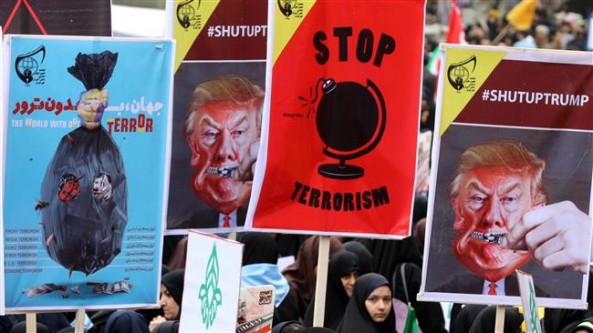 TEHRAN, Young Journalists Club (YJC) -A recently conducted opinion poll shows that 94.5 percent of Iranians do not trust the United States which has held no diplomatic relations with Tehran since the 1979 Islamic Revolution.

The Afkar Iranian Center, a public opinion polling institute, conducted the survey from October 7 to 13 among 863 adults across Iran's provincial capitals, the Tasnim news agency reported.

The results come less than a year since the inauguration of US President Donald Trump, who both on his campaign trail and after stepping into the job, has expressed exceeding animosity towards the Islamic Republic.

The antagonism has seen Trump attack the 2015 nuclear deal between Tehran and world countries, which include Washington itself, and impose several rounds of sanctions against the Iranian missile program.

He has also threatened to “tear up” the international accord. Last month, Trump refused to “certify” Tehran’s compliance with the accord during a speech in which he called Iran a "terrorist nation" and used "Arabian Gulf" to refer to a body of water historically known as the Persian Gulf.

The insults triggered angry reactions among the Iranians who took to the streets in massive numbers Saturday to mark the anniversary of the 1979 takeover of the US embassy in Tehran.

The turnout for the annual Iranian street rallies commemorating the US embassy takeover, a pivotal event of the Islamic Revolution, appeared to be higher than in recent years.

The demonstrations came amid uncertainty about the nuclear deal, officially known as the Joint Comprehensive Plan of Action.

More than 23 percent of the respondents in the survey said they did not have hope in the agreement’s future, 27 percent chose the “little or very little” hope choice, and 29 percent said they were hopeful of the deal’s outlook “to some extent.”

Washington has a history of animosity with Tehran even when the country was a close ally of the United States before the Islamic Revolution. The CIA engineered a coup in 1953 that brought down the elected government of Prime Minister Mohammad Mosaddeq.

The US also supported the former Iraqi dictator Saddam Hussein in his eight-year war against Iran in the 1980s, providing him with vital intelligence and weapons. The war also marked direct US attacks on Iran's offshore oil facilities in the Persian Gulf and the downing of an Iranian Airbus in which 290 people were killed.

Last month, Trump unveiled tougher immigration measures against Iranians along with the citizens of 10 other countries. Those measures were purportedly aimed at protecting Americans from possible terrorist attacks.

No Iranian has ever been implicated in any known terrorist attack, but Saudi Arabia, where 15 of the 19 terrorists involved in the September 11 attacks came from, is not in the list.

Share to
Related News
Iran administration to continue support for Armed Forces: Rouhani
Rallies in front of former US embassy in Tehran to mark US embassy takeover
US plot to partition Syria doomed to failure
Iran marks 1979 US embassy takeover in nationwide rallies
Tags
Iranians ، trust US ، do not
Your Comment