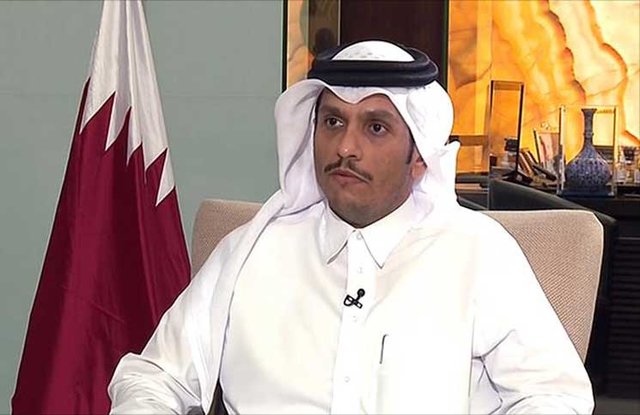 TEHRAN, Young Journalists Club (YJC) -On ties between Qatar and Iran, the foreign minister noted that Qatar has a unique relationship with Iran. “Qatar is located between and shares borders with two big countries in Saudi Arabia and Iran.”

He noted however that there were concerns of Iran’s increasing influence in the region, but stressed that those fears must be addressed peacefully and that is what the State of Qatar is encouraging other (Persian) Gulf states to do. This was also the decision taken during the (P)GCC summit in 2016 -- to engage in dialogue with Iran on the principle that the (P)GCC will be one entity and Iran the other, he said.

He stressed that Qatar was still committed to resolving the (P)GCC crisis because “there is a bigger threat in the region, which is terrorism”.

In an interview held with US TV network MSNBC, Sheikh Mohamed said the propaganda waged against Qatar accusing it of terrorism was baseless.

He stressed that Qatar was a leader in countering terrorism and extremism, highlighting that the country hosts the central command for the global coalition.

“Qatar is a frontrunner in combating extremist ideologies when it establishes schools and provides high-quality education to vulnerable societies and poor countries abroad,” he said adding that Qatar provided education to 7 million children in East Asia and Central Asia.

Sheikh Mohamed however stressed that Qatar was committed to reaching a resolution, because “the country realizes that terrorism is a bigger threat facing the region”.

Asked whether Saudi Crown Prince Mohamed bin Salman was a threat to Qatar’s future, Sheikh Mohamed said there was a diversion in the policy of Saudi Arabia and the UAE from the (P)GCC agreement which was engagement in dialogue. There was also a sense of unpredictability when it comes to the policies of Saudi Arabia and the UAE in the region, he said.

The foreign minister added “there was a lot of chaos and crises in the region, pointing out that Qatar was part of a bigger strategy now seen in Lebanon too.”