TEHRAN, November 25 - The US and Turkey have discussed “pending adjustments” to military support for Washington’s “partners” on the ground in Syria, and have agreed to join forces against “all forms” of terrorism, including the Kurdish PKK and Fetullah Gulen’s movement. 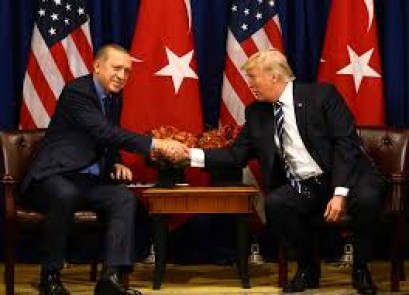 TEHRAN, Young Journalists Club (YJC) -The US and Turkey have discussed “pending adjustments” to military support for Washington’s “partners” on the ground in Syria, and have agreed to join forces against “all forms” of terrorism, including the Kurdish PKK and Fetullah Gulen’s movement.

Earlier, Turkey's foreign minister announced that Washington has also allegedly agreed to stop arming the People’s Protection Units (YPG), a Kurdish militia that serves as the backbone for the US-led Syrian Democratic Forces.

The White House, however, did not explicitly mention the issue of arming YPG in its statement following the phone conversation, but did say that Trump and Erdogan discussed “pending adjustments” to Washington’s military support for US-led forces on the ground in Syria. It also confirmed the two leaders “discussed combating terrorism in all its forms,” and to foster “regional stability.”

“President Trump also informed President Erdogan of pending adjustments to the military support provided to our partners on the ground in Syria, now that the battle of Raqqa is complete and we are progressing into a stabilization phase to ensure that ISIS cannot return. The leaders also discussed the purchase of military equipment from the United States,” the White House said.

Trump is determined about “bringing peace to the mess that I inherited in the Middle East,” he tweeted before the phone call. With such a heavy burden, the US president then told his Twitter followers that he is heading off “to play golf (quickly) with Tiger Woods and Dustin Johnson.”

Turkey has long argued that the US must stop funding and arming the Kurdish Units in Syria, emphasizing that YPG is a terrorist organization affiliated with its own homegrown Kurdish insurgent group, the Kurdistan Workers’ party (PKK).

Trump's conversation with his Turkish counterpart comes two days after Russian President Vladimir Putin hosted the leaders of Iran and Turkey, trying to find a political solution to end the crisis in Syria, as the battle against terrorist groups enters its final stretch. Ankara and Tehran played crucial roles in negotiating the so-called “de-escalation zones” in Syria, and are actively involved in trying to attain a political settlement in the war-ravaged country.

“The presidents of Iran and Turkey supported the initiative to convene an all-Syrian forum-congress of the national dialogue in Syria. We agreed to hold this important event at the proper level and ensure the participation of representatives of different sectors of Syrian society,” Putin said after the talks in Sochi Wednesday.