TEHRAN, December 4 -Venezuelan President Nicolas Maduro announced Sunday that the country will launch its own cryptocurrency, called the “Petro,” which will be backed by the country’s vast natural resource reserves. 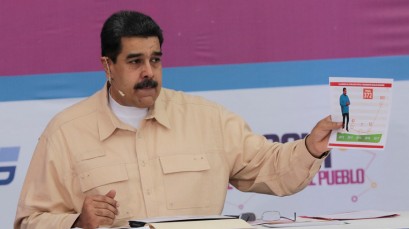 TEHRAN, Young Journalists Club (YJC) -Venezuelan President Nicolas Maduro announced Sunday that the country will launch its own cryptocurrency, called the “Petro,” which will be backed by the country’s vast natural resource reserves.

“Venezuela is announcing the creation of its own cryptocurrency. It will be called The Petro. It will allow us to innovate towards new forms of international finance for the economic and social development of the country," Maduro said Sunday in a statement on state broadcaster VTV, as cited by El Periodico.

Appearing on the weekly television show, "Sundays with Maduro," the Venezuelan president announced the new cryptocurrency, whose value will be pegged to the country's vast reserves of oil and gas as well as its mineral wealth, including gold, and whose purpose will be to “to advance the country's monetary sovereignty, to carry out financial transactions and to defeat the financial blockade against the country.“

Amid an ongoing raft of economic sanctions, spearheaded by the United States, Venezuela's national currency, the Bolivar, has lost approximately 57 percent of its value in the last four weeks alone, Reuters reports.

"We are facing a financial war against the country which we have denounced and the opposition has denied. There are businesspeople who are unaffected by Donald Trump's blockade. With this, we will join the 21st century," Maduro added, as cited by Panorama.

Maduro also approved the creation of a BlockchainBase observatory to oversee the development and rollout of the new cryptocurrency, reports La Patilla.

OPEC member Venezuela boasts the largest proven reserves of crude oil in the world, but has struggled against the plunge in oil prices which began in 2014.

The WTI benchmark currently sits at $58.36 per barrel, while Brent is faring marginally better at $63.73. Venezuela's sour crude basket price currently sits at $50.15, an unsustainable level given the country's dismal economic outlook and overreliance on US refineries to process its oil.

Meanwhile, cryptocurrency markets, led by Bitcoin, are experiencing a boom, with record highs and major volatilitygrabbing headlines across the world in recent weeks.