TEHRAN, December 9 - Hundreds gathered in front of the White House on Friday to protest President Donald Trump's decision to recognize Jerusalem (al-Quds) as the “capital” of Israel. 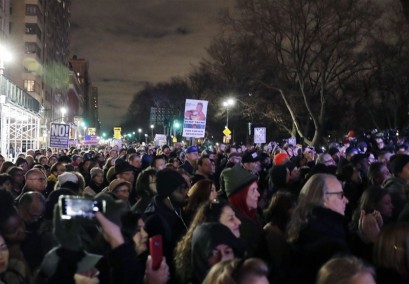 TEHRAN, Young Journalists Club (YJC) -Hundreds gathered in front of the White House on Friday to protest President Donald Trump's decision to recognize Jerusalem (al-Quds) as the “capital” of Israel.

"This decision exposes what we have been saying for a long time that there is no such a thing as a peace process," well-known US-based Muslim scholar, Omer Suleiman told Anadolu Agency.

"If we are to initiate an honest peace process then the American government has been anything but an honest broker."

However, the fault largely lies on Muslim leaders and Arab leaders, Suleiman said, adding that some of those Arab leaders have secretly aided the Israeli occupation while some have given permission "behind closed doors".

On Wednesday, Trump announced US recognition of al-Quds as Israel’s capital as well as plans to relocate the US embassy in Israel from Tel Aviv to Jerusalem.

The controversial decision has angered Muslims throughout the world.

Rabbi Yisroel Dovid Weiss and his followers from Jews United Against Zionism were among those who participated in the demonstration.

While Muslims performed Friday prayer in front of the White House, Rabbi Weiss and his companions held banners reading, “Torah true Jews in Jerusalem and Worldwide condemn the aggression in Al-Aqsa and the occupation of Palestine” and “Judaism rejects Zionism and the state of Israel”.

"This decision on Jerusalem will make everything worse," Rabbi Weiss said.

Protestors chanted against Israel and Trump's decision on Jerusalem, carried banners reading, “Stop the occupation in Palestine now”, “Jerusalem belongs to Palestinians” and "We reject Trump's decision". The event ended without conflict.

Demonstrators chanted against Israel and Trump's decision, shouting "Free, Free Palestine, Long live Palestine," while carrying banners reading, "This is unacceptable, Palestine will be free,” “Israel is a terrorist, Palestine is free” and "We reject Trump's decision". The event ended without conflict.

During the massive demonstration under intense security measures, the New York police had to warn some demonstrators to stay in the designated areas.