TEHRAN, December 11 - The Grand Imam of Egypt's al-Azhar Mosque, the country's highest Islamic authority, canceled a meeting with US Vice President in the wake of an announcement by US President that Washington will recognize Jerusalem al-Quds as Israel’s capital. 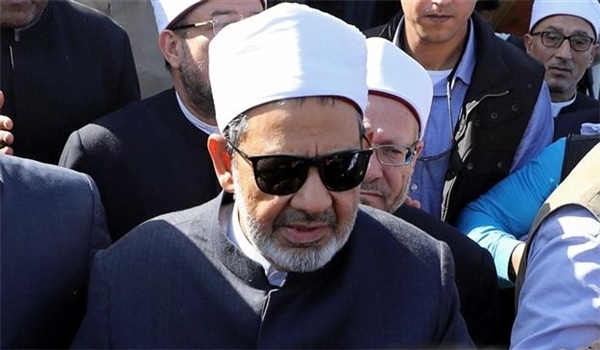 TEHRAN, Young Journalists Club (YJC) - Egypt’s Al-Azhar Grand Imam Ahmed Al-Tayeb announced his rejection to meet with US Vice President Mike Pence, who will visit Egypt late December, according to a statement issued by Al-Azhar Sheikhdom on Friday.
“How can I sit with those who granted what they do not own to those who do not deserve it,” Al-Tayeb expressed in the statement.

The grand imam called on US President Donald Trump to overturn his illegitimacy and illegal decision.
According to the al-Azhar statement, Tayeb had agreed to meet the American official after receiving an official request from the US embassy a week ago, “but after the unjust and unfair American decision on Jerusalem [al-Quds], Al-Azhar's grand imam announces his strong and decisive rejection of this meeting."

"Al-Azhar cannot sit with those who falsify history and steal the rights of people," the statement added.
Trump announced that the US would be recognizing Jerusalem al-Quds as Israel’s capital on Wednesday and ordered that work on the relocation of the American embassy from Tel Aviv to al- Quds begin.

The move was hailed by Israel but condemned by the rest of the international community as one which undermines the peace talks.
Washington’s al-Quds move has raised a chorus of outcry across the international community. The Muslim world, the UN and even US allies in the West have criticized the bid, saying it would plunge the already tumultuous region into new upheaval.

Clashes also broke out between Israeli troops and Palestinian protesters after Friday prayers in Jerusalem al-Qud's Old City, Hebron (al-Khalil), Bethlehem and Nablus in the West Bank as well as the besieged Gaza Strip. At least two Palestinians were killed and about 770 others were injured during the unrest.
People in different countries have also hit the streets to denounce Trump's recognition of Jerusalem al-Quds as Israel’s capital.

Jerusalem al-Quds remains at the core of the Israeli–Palestinian conflict, with Palestinians hoping that the Eastern part of the city would eventually serve as the capital of a future independent Palestinian state.