TEHRAN, December 13 - Scores of Israeli Arabs have taken to the streets of Tel Aviv to vent their anger at US President Donald Trump’s new policy on Jerusalem al-Quds, saying the ancient city is the capital of Palestine, not that of the occupying entity. 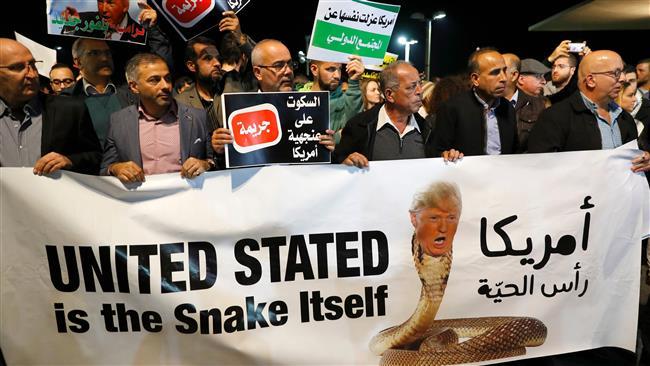 TEHRAN, Young Journalists Club (YJC) - The demonstrators, among them Arab members of the Israeli parliament, rallied outside the US embassy in Tel Aviv on Tuesday night.

Carrying Palestinian flags, the protesters chanted slogans such as, “Trump, Israel, Jerusalem is Arab. Jerusalem is Muslim,” “capital of Palestine,” “Trump=new Balfour,” referring to the 1917 Balfour Declaration that paved the way for the creation of Israeli entity.

They also carried signs and banners reading, “The United States is the snake itself,” “Trump’s decision violates international law,” “Hands off al-Quds” and “America isolated itself from the international community.”

Tuesday’s event was organized by the Higher Arab Monitoring Committee, an independent political organization that coordinates the activities of various Israeli Arab bodies.

Trump sparked international outrage last week by declaring that Washington was recognizing Jerusalem al-Quds as the “capital” of Israel and that he had instructed his administration to begin the process of moving the American embassy from Tel Aviv to the holy city.

The entire Jerusalem al-Quds is currently under Israel’s control, while the regime also claims the city’s eastern part, which hosts the third holiest Muslim site. The city has been designated as “occupied” under international law since the 1967 Arab War, which Palestinians want as the capital of their future state.

Speaking at the Tel Aviv demonstration, Israeli Arab lawmker Aida Touma-Suleiman said Trump’s declaration is a “rude intervention in the region” and leads to “further disaster.”

“This decision clarifies for us further that the US is not a neutral player in making peace. The US is an ally of the Israeli occupation,” she said.

Ahmad Tibi, another Israeli Arab lawmaker, said, “Trump is totally adapting the narrative of the occupation. Mr Trump is proving that the White House and himself are part of the problem, not part of the solution.”

“We are here to say that al-Quds is the capital of Palestine and that the United States is no more a player in the so-called ultimate deal, which became, ultimate slap in the face,” he added.

Former Israeli MP Ibrahim Sarsour also accused the US president of “endangering” people in the region, urging him to change his controversial policy and act in line with international law.

Another ex-Israeli lawmaker, Taleb el-Sana, warned that Trump’s “unacceptable” move “makes obstacles in the peace process and he has no right to declare that Jerusalem belongs to Israel. Jerusalem [al-Quds] is an issue for negotiations between Palestinians and Israel.”

The occupied territories witnessed several protests this week in the fallout of the US president’s al-Quds decision.

Separately on Tuesday, some 200 people gathered in front of the Berlin Central Station in the German capital on Tuesday to condemn Trump’s announcement.

They carried placards reading, “Freedom for Palestine,” and “Defend the right to pray. Save al-Aqsa Mosque.”

The demonstrators held the Tel Aviv regime responsible for the latest violent clashes between Palestinians and Israeli forces, which has left four Palestinians dead and over 1,700 others injured.