TEHRAN, December 20 - Iranian Foreign Minister says that the joint statement published on the rejection of US’s decision about Jerusalem al-Quds is the fruit of Iran-Azerbaijan-Turkey cooperation. 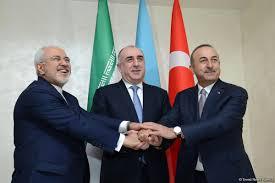 TEHRAN, Young Journalists Club (YJC) - Attending a press conference in Baku with his Turkish and Azerbaijani counterparts, Mohammad Javad Zarif siad that the trilateral combination of Iran, Azerbaijan, and Turkey is an efficient way to pursue regional cooperation.

Zarif pointed out to the historical, geographical and cultural links between Iran, Azerbaijan, and Turkey saying that there are many grounds of cooperation between the three countries including political consultations the results of which was the joint statement published dealing also with the rejection of US’s decision about Palestine and holy al-Quds.

Economic and cultural collaborations including tourism, energy, and transit were also among the areas of interest discussed between the countries.

Iran’s top diplomat also suggested the collaborations expand with the presence of private sectors to utilize the potentials of the trilateral cooperation.