FM spokesman: US moving towards isolation by its ‘unwise actions’

TEHRAN, December 25 - Iranian Foreign Ministry Spokesman Bahram Qassemi said that the US is moving towards ‘isolation’ because of its ‘unwise actions’. 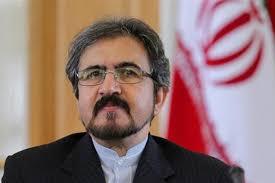 TEHRAN, Young Journalists Club (YJC) - “The US was isolated over Jerusalem issue. The US official should get this warning and understand that the era of commanding do and don’ts has been over.”

He said that the US faced a disastrous show over the UN vote on Jerusalem al-Quds and it should improve its behavior.

The Iranian official continued that the UN vote indicated that the US is facing a great development and the US is not previous US which could make coalition.

What happened in the UN suggested ‘isolation and loneliness’ of the US as to Holy al-Quds.