TEHRAN, December 26 -Russian President Vladimir Putin says Moscow currently sees no need for a heavy military presence in Syria, but it will continue its counter-terrorism battle in the Arab state. 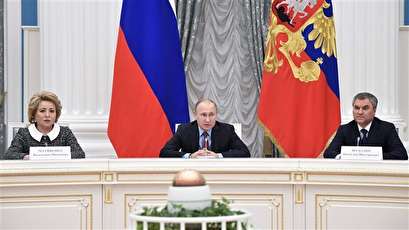 TEHRAN, Young Journalists Club (YJC) -Russian President Vladimir Putin says Moscow currently sees no need for a heavy military presence in Syria, but it will continue its counter-terrorism battle in the Arab state.

Speaking at a meeting with senior Russian lawmakers on Monday, Putin stressed that Moscow currently sees no need for a heavy military presence in Syria, adding, however, that anti-terrorism efforts will go on if required.

“There is no need for such a widespread use of the Russian armed forces in Syria, as it was before, although we have two stationing sites, and we, of course, will continue the fight against terrorism, including in the territory of Syria, if necessary we will work there selectively,” he said.

Russia has two bases in Syria, the Hmeimim airbase in Latakia Province and a naval facility in the port city of Tartus.

Putin also referred to the process of Russian forces’ pullout from Syria after the collapse of Daesh, noting that the scale of  Moscow’s counter-terrorism activities in the Arab country would be smaller than it previously was.

He rejected “a wide use of all components of our armed forces,” saying, “That is why the withdrawal took place, since so much equipment and personnel are no longer required there. At least not required now.”

Earlier this month, Putin ordered the partial withdrawal of Russian troops from Syria after government troops, backed by Russian air force and Iranian military advisors, liberated all areas controlled by Daesh and declared victory over the Takfiri group.

Russian jets have been conducting air raids against Daesh and other terrorist outfits inside Syria at the Damascus government’s request since September 2015.

Besides its role on the battlefield, Russia, along with Iran and Turkey, has been mediating a peace process between Syrian warring sides in the Kazakh capital, Astana, since January.

The latest round of Astana talks took place earlier this month, during which the three mediators as well as Syrian government delegates and the 20-member opposition team agreed to hold a Moscow-proposed “peace congress” in late January Russia’s Black Sea resort of Sochi as part of efforts to find a political solution to the six-year-old Syrian conflict.

Separately on Monday, around 40 Syria opposition groups, including some of the military factions who participated in earlier rounds of the UN-sponsored Geneva peace talks, rejected Russia’s plan to convene the Syrian National Dialogue Congress in Sochi.

They claimed that Moscow was seeking to bypass a UN-brokered Geneva peace process and had failed to put pressure on the Syrian government to reach a political settlement.