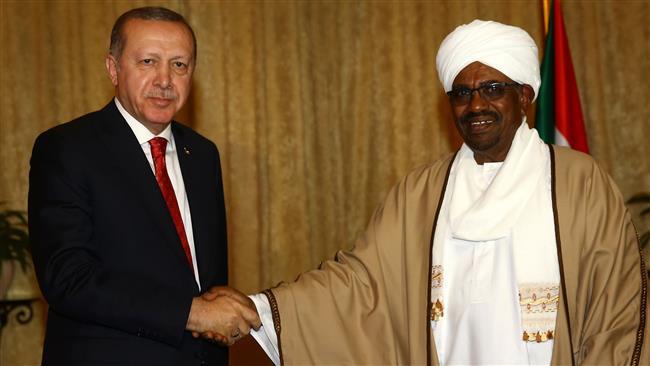 The Turkish leader, who was in Sudan’s capital city of Khartoum as part of his three-day tour to Africa, said on Monday that his Sudanese counterpart Omar al-Bashir had agreed to temporarily hand over Suakin to Ankara for rebuilding purposes in order to make it as a tourist site and a transit point for those who want to perform Umrah or Lesser Pilgrimage from Turkey to Saudi Arabia’s holy sites.

“You should give the island to us for a while and we will rebuild and revive this island in accordance with its original form,” Erdogan said that he had told the Sudanese president at the meeting, adding “My brother Omar al-Bashir said ‘OK.’”

Suakin, used to be considered the height of medieval luxury on the Red Sea, was Sudan’s major port when it was ruled by the Ottoman Empire, but fell into disuse over the last century following the construction of Port Sudan, 60 kilometers to the north.

The Turkish leader further said that the refurbished Suakin would attract Mecca-bound pilgrims who would want to see the island’s history, contributing to Sudan’s tourism sector. “Imagine, people from Turkey wishing to go on pilgrimage will come and visit the historical areas on Suakin Island. From there ... they will cross to Jeddah by boat,” he added.

Erdogan, however, did not pay a visit to Sudan, as the first trip by a Turkish president to the poor African nation, solely for reconstructing a bleak port city.

According to Ghandour, the two presidents also agreed “to build a dock to maintain civilian and military vessels. The Sudanese top diplomat went on to say that the leaders had signed an agreement “that could result in any kind of military cooperation.”

He said the Suakin deal was one of several, worth $650 million in total, agreed with Sudan, which emerged from two decades of US sanctions in October and is striving to draw international investment.

Furthermore, a joint statement issued by both leaders said that “a concrete step has been taken by establishing the High Level Strategic Cooperation Council,” which would be maintained jointly by both presidents.

The wide-ranging agreements came some three months after Turkey formally opened a $50 million military training base in the African country as Ankara wields growing influence in the region.

According to Turkey’s Foreign Economic Relations Board, Erdogan and Bashir has said that they aimed for trade between the two countries to reach $10 billion.