TEHRAN, January 20 -The US is working to create alternative government systems on Syrian territory which goes against its promises to respect the country’s territorial integrity, Russia’s Foreign Minister Sergey Lavrov has said. 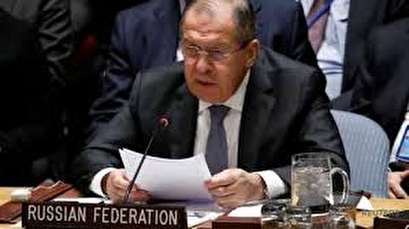 TEHRAN, Young Journalists Club (YJC) -The US is working to create alternative government systems on Syrian territory which goes against its promises to respect the country’s territorial integrity, Russia’s Foreign Minister Sergey Lavrov has said.

Responding to a question posed by RT’s Caleb Maupin at Friday's briefing at UN Headquarters in New York, Lavrov commented on America's role in the crisis in northern Syria, which escalated into a new Turkish-Kurdish conflict after news of Washington’s plans to create a “border force” comprising of Kurds. Despite the Americans backtracking on its statement, and saying they were misunderstood, Ankara, which considers the Kurdish-dominated YPG force terrorists, said it was launching a military operation against the Syrian Kurdish enclave. Lavrov said the developments were only a part of the pattern of US policy in Syria.

“It’s a fact that US forces are seriously involved in creating alternative government bodies on vast part of the Syrian territory. And this, of course, absolutely contradicts their own obligations, which they committed to on numerous occasions, including at the UN Security Council, on maintaining the sovereignty and the territorial integrity of Syria,” Lavrov said.

Washington's inconsistency on Syria is also “quite characteristic of modern US diplomacy, including the reasons for the American presence there, and the reasons for the actions of the coalition, which they command,” Lavrov added. Russia is “concerned” by the US' actions in the country, he said, adding, that he had discussed the situation with the US Secretary of State on numerous occasions.

“Rex Tillerson told me many times that the only reason for their presence there [in Syria] is defeating Islamic State (IS, formerly ISIS/ISL). Now they have some much more long-standing plans,”Lavrov said. “We will have to take this into account and look for solutions that won’t allow the destruction of Syrian sovereignty.”

A Turkish journalist asked Lavrov about media reports that Russian forces have been withdrawn from the Afrin area. “Those reports have been refuted,” the diplomat replied.

Earlier Friday, Turkey's Defense Minister Nurettin Canikli said his country’s troops haven’t entered Afrin yet, but “the operation [against the Kurds] has actually de facto started with cross-border shelling.” The Syrian government made clear to Ankara that it considers Turkey’s military presence on its territory as a violation of its sovereignty, and warned that it will shoot down Turkish jets in Syrian airspace.

The US currently has an estimated 2,000 troops on the ground in Syria, deployed in the country without consent from Damascus. The Americans were involved in the Kurdish operation to capture the city of Raqqa from Islamic State jihadists last year. However, despite the defeat of the Islamists, Washington said it has no intention of withdrawing its forces.