TEHRAN, January 24 - Egypt's rights lawyer and presidential hopeful has called off his campaign and quit the race, a day after a potential threat to President Abdel Fattah el-Sisi in the March elections was detained. 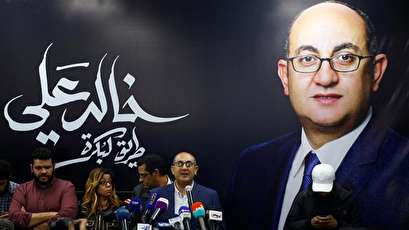 TEHRAN, Young Journalists Club (YJC) - "We today announce our decision not to enter this race, and will not present our candidacy papers," the candidate, Khaled Ali, said at a press conference in Cairo on Wednesday.

The announcement came a day after ex-military chief of staff General Sami Anan, a presidential rival of President Abdel Fattah el-Sisi in March elections, was detained after the Egyptian Armed Forces accused him of forgery and other crimes linked to his candidacy announcement.

"There has been stubbornness by the electoral commission and many violations against the other candidate," Ali said, referring to Anan.

Earlier, two would-be challengers to Sisi have pulled out of the race and another two have been arrested, including Anan.

Sisi came to power as president in June 2014 after winning a landslide victory in the presidential election held a month earlier with securing nearly 97 percent of the vote. In July 2013, he led a military coup against Mohamed Morsi, Egypt’s first democratically-elected president after the fall of former dictator Hosni Mubarak in 2011, that led to Morsi’s ouster and imprisonment.

The presidential election is scheduled to be held on March 26-28, with candidates required to submit all necessary papers to Egypt’s National Elections Authority between 20 and 29 January.