Trudeau actually corrects woman to say ‘peoplekind’ instead of ‘mankind’

TEHRAN, February 7 -Justin Trudeau interrupted a woman complaining about Canada’s restrictive regulations on religious volunteers to tell her to use the term ‘peoplekind’ instead of ‘mankind.’ 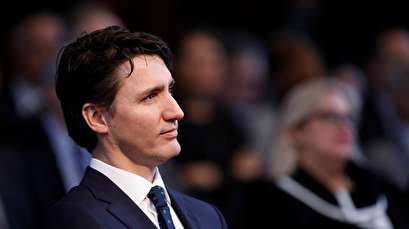 TEHRAN, Young Journalists Club (YJC) -Justin Trudeau interrupted a woman complaining about Canada’s restrictive regulations on religious volunteers to tell her to use the term ‘peoplekind’ instead of ‘mankind.’

The Canadian Prime Minister was hosting a Q&A at MacEwan University in Edmonton on Friday as part of his cross-country tour which began last month.

Trudeau was listening to a complaint by a woman from a church who wanted him to look at the restrictions Canada has on people who want to volunteer for religious organizations.

“We have received many awards, however, unfortunately in Canada, our volunteering as a religious charitable organization is extremely difficult,” said the woman.

“We came here today to ask you to also look into the policies that religious charitable organizations have in our legislations so that it can also be changed because maternal love is the love that’s going to change the future of mankind.”

Which is precisely where Trudeau jumped in to explain that “we like to say peoplekind.”

“We like to say peoplekind, not necessarily mankind,” the prime minister mansplained.

The PM, who is a vocal feminist, advocate for gender equality and responsible for Canada’s first gender-balanced cabinet, was trolled mercilessly on Twitter for the ridiculous correction, leaving many wondering where the politically correct war on the English language will stop.