TEHRAN, February 11 -The Egyptian army says it has killed 16 “terrorist elements” during military operations in the restive Sinai Peninsula and nearby areas. 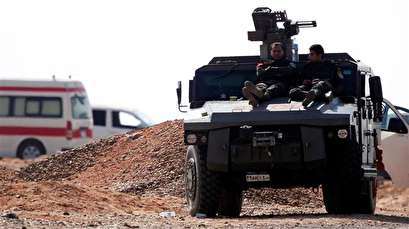 TEHRAN, Young Journalists Club (YJC) -The Egyptian army says it has killed 16 “terrorist elements” during military operations in the restive Sinai Peninsula and nearby areas.

The military made the announcement in a statement on Sunday, saying that the fatalities had taken place two days earlier during a major security operation in the volatile northern region as well as parts of the Nile Delta and the Western Desert.

“The air force targeted and destroyed 66 targets used by terrorist elements to hide from air and artillery attacks, and to escape from their bases during raids,” the statement said.

It added that forces involved in the operation found a media center with computers, communication equipment, and books and documents related to extremist ideology.

The Egyptian military also said that four other militants had been arrested in the security operations, which involved troops from Egypt’s air force, navy, and ground forces as well as police and border guards.

Egyptian President Abdel Fattah el-Sisi, who is preparing to seek a second term in elections in March, has vowed that the army will employ “absolute force” to eliminate terrorism in the Sinai Peninsula.

The Sinai Peninsula has been under a state of emergency since October 2014, after a deadly terrorist attack left 33 Egyptian soldiers dead.

Over the past few years, terrorists have been carrying out anti-government activities and fatal attacks, taking advantage of the turmoil in Egypt that erupted after the country’s first democratically-elected president, Mohamed Morsi, was ousted in a military coup in July 2013.

The Velayat Sinai group, which is affiliated with the Daesh Takfiri terrorists, has claimed responsibility for most of the assaults.

An American daily revealed last week that Israel has been using unmarked warplanes and drones and unconventional flight routes to stage airstrikes against targets in the peninsula at least since 2014. The New York Times said the airstrikes, allegedly more than 100, are being conducted secretly and with Sisi’s approval.