TEHRAN, February 17- Some 19 people have been killed and dozens more wounded when three bombers blew themselves up in Nigeria’s northeastern Borno State, the hardest hit by Daesh-inspired Boko Haram militancy. 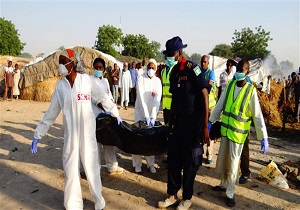 TEHRAN, Young Journalists Club (YJC) - Damian Chukwu, police commissioner for Borno State, said on Saturday that the explosions occurred at a fish market about 20 kilometers (12 miles) from the center of Maiduguri on Friday evening.

“We have 19 dead and about 70 others injured... Two of the bombers attacked the Tashan Kifi fish market. Then four minutes later, a third bomber struck nearby,” said Kolo.

“The victims included 18 civilians and one soldier. The Tashan Kifi is an informal market which serves as an eatery, market and also hang-out for residents,” the official added.

Kolo further said 22 out of the 70 injured are in critical condition, blaming the attack on the Boko Haram militant group.

“There is no question as to who did it: Boko Haram has targeted Konduga several times,” he said.

More than 20,000 people have been killed since Boko Haram started its deadly campaign in northeast Nigeria in 2009. The violence has claimed many lives in neighboring countries of Chad, Niger and Cameroon as well.

Boko Haram, which pledged allegiance to the Daesh Takfiri group in 2015, has been largely pushed out of its main strongholds in northern Nigeria, according to the country’s military and government.

The group, however, is still active in its Sambisa Forest enclave in Borno and launches sporadic attacks on civilians and security forces from there.

The United Nations has warned that areas affected by Boko Haram face a humanitarian crisis.