TEHRAN, February 21 -The presidential office in the Philippines has been seriously disturbed by the US intelligence community’s assessment that Rodrigo Duterte represents a “threat to democracy.” 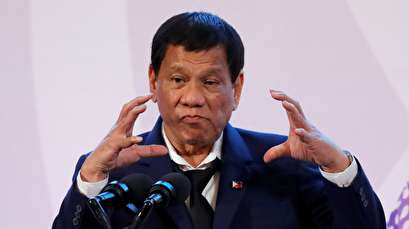 TEHRAN,Young Journalists Club (YJC) -The presidential office in the Philippines has been seriously disturbed by the US intelligence community’s assessment that Rodrigo Duterte represents a “threat to democracy.”

Last week, the US Intelligence Community, comprising 16 federal agencies, listed President Duterte as one of the leaders in Southeast Asia who continues to pose a “threat” to democracy and human rights.

“In the Philippines, President Duterte will continue to wage his signature campaign against drugs, corruption, and crime. Duterte has suggested he could suspend the Constitution, declare a 'revolutionary government,' and impose nationwide martial law,” a tiny paragraph on page 19 of the Worldwide Threat Assessment report said.

Duterte has long been under fire for alleged extrajudicial killings and human-rights violations in his no-holds-barred war on drugs. Over 4,000 suspected drug dealers and abusers have been killed by law enforcement and “unidentified gunmen” in the country-wide crackdown on drugs since July 2016.

Furthermore, the report blamed Duterte for declaring and extending the martial law on Mindanao, where Islamic State-affiliated militants seized parts of Marawi City last spring. The only other reference to the Philippines in the 28-page report said that the country was identified by the Freedom House in 2016, as one of 30 nations worldwide, which “used social media to spread government views, to drive agendas, and to counter criticism of the government online.”

But since those few hundred words marring Duterte’s reputation were penned by the US intelligence community, they were met with“concern” by the 72-year-old Philippine president.

“We view this declaration from no less than the intelligence department of the United States with some concern,”presidential spokesman Harry Roque told DZMM radio. “I do not think that’s true. [Duterte] is a lawyer, he knows the law, he wants to uphold the rule of law, he knows about the bill of rights.”