TEHRAN, March 2 - Nearly two dozen people have lost their lives when Turkish military forces launched a series of attacks against the purported positions of US-backed militants from the Kurdish People’s Protection Units (YPG) in Syria’s northwestern region of Afrin. 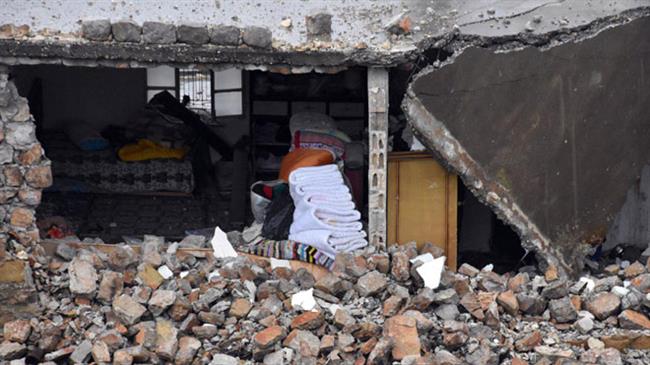 TEHRAN,Young Journalists Club(YJC) - Syria’s official news agency, SANA, reported on Thursday night that Turkish forces shelled the villages of Sharran, Maidanaki and Haj Khalil in the western sector of Afrin, killing 20 civilians, including a woman, and injuring and dozens more.

A number of civilian buildings were badly damaged in the attacks as well.

Meanwhile, the Turkish military said on Thursday that at least 2,222 terrorists have been killed since the launch of Operation Olive Branch.

Ankara views the YPG as the Syrian branch of the militant Kurdistan Workers' Party (PKK) that has been fighting for an autonomous region inside Turkey since 1984.

Turkish President Recep Tayyip Erdogan has repeatedly said that Afrin should be cleared of “terrorists,” and demanded the deployment of Turkish troops there during a speech back in November 2016.

This is while US officials regard the YPG as the most effective fighting force against the Daesh Takfiri terrorist group in northern Syria, and have substantially increased their weaponry and technology support to the terrorist group.

The controversy over a possible Syria border force first started on January 14 when a report emerged on Reuters saying that the military coalition led by the United States in Syria was planning to set up a large border force of up to 30,000 personnel with the aid of its militia allies.

The Syrian government has already condemned the “brutal Turkish aggression” against Afrin, rejecting Ankara’s claim about having informed Damascus of the operation.

Damascus "strongly condemns the brutal Turkish aggression on Afrin, which is an inseparable part of Syrian territory," SANA cited a Syrian Foreign Ministry source as saying on January 20.

“Syria completely denies claims by the Turkish regime that it was informed of this military operation,” the source added.