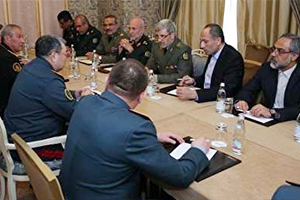 TEHRAN, Young Journalists Club (YJC) - Hatami blasted interventionist policies of the US, saying, “Regional countries should not allow Americans to impose their ill-wishing plots, which are against interests of the region, to the region and cause instability, insecurity and chaos in the region.”

In a meeting with his Pakistani counterpart Khurram Dastgir, he also stressed boosting bilateral defense and military ties between Iran and Pakistan.

Dastgir, for his part, expressed hope Iran-Pakistan cooperation would lead to more stability and security of their common borders.

Peace and progress would not be attained in the region without establishing peace and security, he said.