TEHRAN, April 12 - A senior aide to Leader of the Islamic Revolution Ayatollah Seyyed Ali Khamenei has visited Syria’s Eastern Ghouta on the outskirts of the capital Damascus. 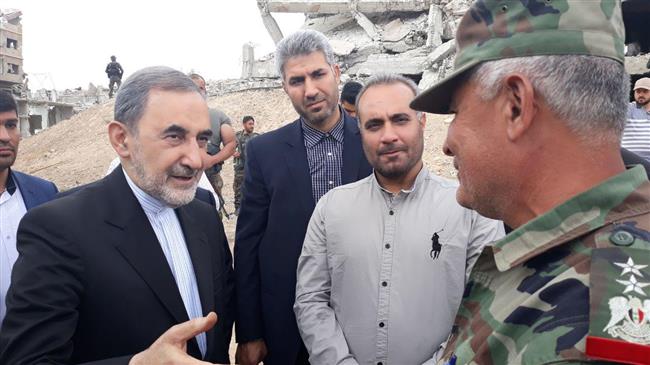 Velayati reaffirmed Iran’s support for Syria and the nation’s resistance against terrorists and underlined the necessity of further expansion of bilateral ties to counter the threats of the US, Israel and their regional stooges.

He also congratulated the victories of the Syrian army in Eastern Ghouta, and described as pivotal the strategic ties between Tehran and Damascus.

Earlier in the day, the adviser to Ayatollah Khamenei also met with Syria’s Foreign Minister Walid al-Muallem, during which the two sides emphasized further coordination between the two brotherly countries in order to contribute to further victories of the Syrian army in combating terrorism and confronting its provocative acts and threats by the United States and its allies in the region against Syria.

Velayati, who is in Damascus to attend a conference on Palestine, also stressed that the Islamic Republic would stand by the Syrian government and people and reaffirmed Tehran’s support for resistance against terrorism that has targeted the territorial integrity of Syria and the stability of the region. He also underlined the need for the strengthening of relations with Syria.

Muallem, for his part, briefed the Iranian official on the latest developments in Syria and praised Iran’s full support for his country.

Eastern Ghouta, which is home to nearly 400,000 people, fell to multiple militant groups in 2012, months after Syria plunged into crisis. Militants had been using the area to launch incessant rocket attacks on the capital.